We drove into the parking lot of the Harlingen Convention Center at 4:30 AM.  The huge fifty plus person bus that would take take us west along the Rio Grande Valley into Starr County idled at the curb.  We grabbed the lunches the Rio Grande Valley Birding Festival (RGVBF) had prepared for us, and hurried to join our friends on the bus.  We were very excited about this festival field trip to the “Upper Rio Grande Valley” because that area hosts some rare specialties that can’t be found closer to Harlingen.  Particularly, we were hoping to see white-collared seedeaters, red-billed pigeon, and wild muscovy ducks.  Despite these birds being very rare and local Rio Grande specialties, we figured we would get at least one.  In addition, Starr County has large stretches of desert, which host an assortment of southwestern desert species, such as greater roadrunner, black-chinned sparrow, cactus wren, and pyrrhuloxia.

The overcast sky began to brighten as we neared our first birding location, a preserve along the Rio Grande called Salineño.  We walked down an old, cracked road, through thick, green vegetation.  The cool morning mists drifted off the ground, obscuring the old buildings and trees that lined the road.  Our guides told us that we would have to split up into groups to seek the seedeater, because too many of us would scare it.  As another group branched off, we continued down toward the river to watch for red-billed pigeons.  We came to a small boat launch, where we set up our scopes and waited.  Mist rose off the muddy waters of the Rio Grande in front of us.  Audubon’s and altamira orioles called from the feeding station behind us.

Green jays constantly flew over the river in front of us.  Double-crested and neotropic cormorants flew overhead.  We saw northern pintail, gadwall, blue-winged teal, lesser scaup, and the “Mexican” subspecies of the mallard on the river.  We waited patiently for the seedeater group to come back, without seeing a pigeon.  When the first person from their group wandered into view, we asked them if they’d seen the seedeater.  They nonchalantly replied that they had.  We asked our guide if our group could go and look for the seedeater.  He said he didn’t personally have much interest in it, but eventually led the way.  We walked up a trail over sandy bluffs overlooking the river, scanning the cane patches where our guide said the seedeaters liked to hang out.  As we worked our way upriver, we encountered a mixed flock, mostly blue-gray gnatcatchers and orange-crowned warblers, but we also found a Nashville warbler, a Bewick’s wren, and a verdin.  We stared down into the thick cane for hours, not daring to move for fear of scaring off the supposedly super timid seedeaters.  Every few minutes someone would raise their binoculars, and invariably they would mutter “common yellow-throat” as the bird slid back out of sight.  At noon our guide announced we had to return to Harlingen.

The next day, my friends and I decided to make the two hour drive back to Salineño one more time, in hopes of seeing the seedeater with a smaller group.  My friend Max also knew a place nearby where we could get scaled quail, and other desert birds that we had been hoping for on yesterday’s trip.  When we arrived at the boat launch, we were glad to find we were the only ones there.  We walked slowly up the path toward the cane stands, listening for unusual calls and watching for unaccounted movement.  As we stood staring intently at the largest patch of cane, my friend Ander said he thought he saw one.  We turned, and not twenty feet away, in a small mesquite bush, sat a tiny, cinnamon brown bird.  At long last, a white-collared seedeater!

White-collared Seedeaters (Sporophila torqueola) have become increasingly hard to find in Texas, despite being reasonably common as recently as the 1940s.

Just as we all got on the bird, it flew out of the bush, flashing it’s white wing-bars and small tail.  We followed the bird away from the river, into a small, rocky gully, where we suddenly heard a whistled down-slurred “chew” call from the trees above us.  Looking up, we saw the White-collared seedeater perched in another tree.  No wonder we hadn’t found them the day before by looking in the cane stands.  At the sound of another “chew,” we looked down to see a second bird hoping on the rocks.  We watched the two birds forage and chatter for a while, before they flew off across the river.  It was amazing how much easier they were to find without a huge group of people.

As we drove toward our next stop, a nursery specializing in the plants of the south Texas desert called Rancho Lomitas, the landscape became increasingly desolate and arid.  Huge cacti and thorny bushes grew next to the road.  Black-throated sparrows perched on emergent vegetation.  When we stepped out of the cars onto a soil of hard-packed sand, we were greeted by a man named Jim, who told us about the Ranch and showed us to chairs in front of his trailer that looked out on a well-stocked feeding station.  He told us that if we waited long enough, we should be able to see cactus wrens, pyrrhuloxias, and scaled quail right there.  As soon as we sat down, green jays began swooping in five feet in front of us.  The incredibly close proximity allowed me really appreciate their intricate and gorgeous blue, black, and green patterning. 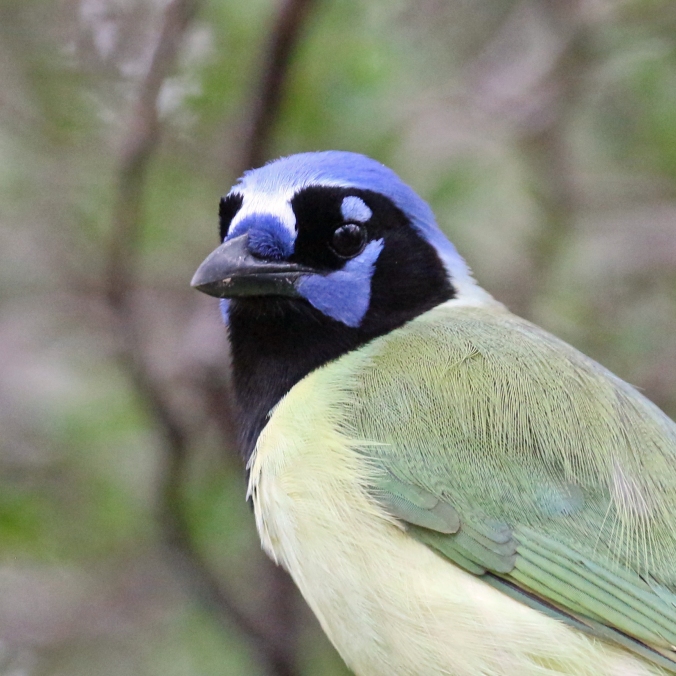 After about five minutes, a movement behind a large flower pot next to me caught my eye.  A cactus wren hopped out from behind the flower pot, and flew up to a platform hanging from a huge cactus, right in front of my face.  It was a life bird for many of my friends.  Suddenly, something moved in the dense brush behind the feeders.  Than a cute plumed face came out into view.  Before long, there were five scaled quail scratching on the ground right under the feeders.  When someone walked past, they would fly up into a tree above our heads, and slowly come back down.

We watched the birds at the feeder for a while longer, and than decided to bird the nearby roads to see if we could find a pyrrhuloxia.  Sure enough, just on the other side of the clearing from Jim’s trailer, we found the desert cardinal perching in the top of a dense, thorny bush.  Pyrrhuloxias are mostly a waxy gray color, with a bright yellow bill and a red crest and face, and red flight feathers.  As we continued down the road, we heard a Bewick’s wren chattering in the grass.  As we paused to watch it, I saw another bird fly across the road.  As it flew, it flashed white edges of its tail.  When it landed, we saw it was a female lark bunting, a lifer that I had not expected on this trip. 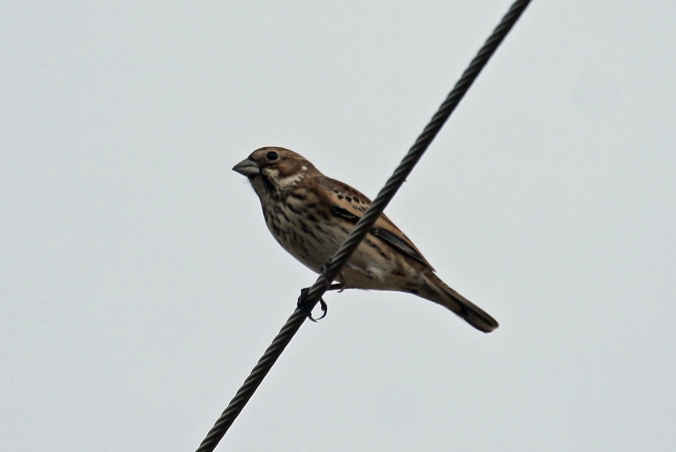 When the lark bunting finally disappeared back into the grass, we turned and saw a great horned owl perched on the power line farther down.  We approached as much as we could without bothering it, and photographed it.  What a great end to a great day of birding.