The first rarity roundup I participated in was the Virginia Rarity Roundup in the fall of 2018.  Held every year in Northampton County, one of the state’s best for birding, this event emphasizes finding state rarities and building the local birding community.  It was great birding — my team found an ash-throated flycatcher! — and lots of fun, and it got me thinking about the ways in which the format of the event could be applied to my home county.  Obviously Nelson is not Northampton.  There are no — or very few — Western, European, or Caribbean birds in the county each fall.  However, I believe Nelson is actually one of the better Central VA Piedmont counties for rare and uncommon but regularly occurring migrants, from species like Connecticut warblers and Philadelphia vireos to northern goshawks and golden eagles.  There are several eBird lists from Rockfish Valley trail with multiple rare species.  Some of the most mouth watering lists are below: 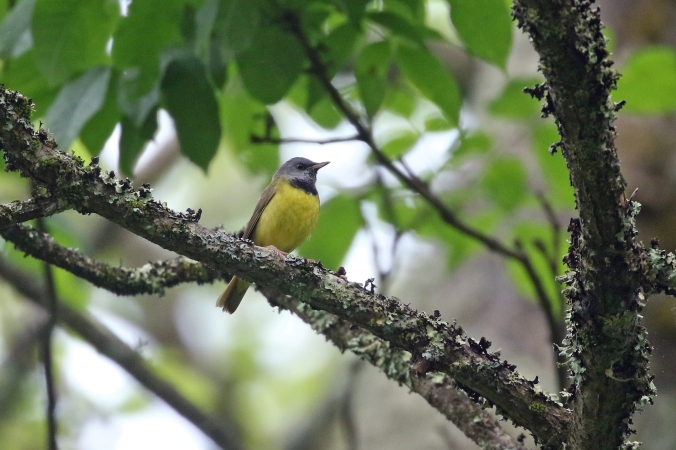 Mourning Warbler.  This photo was taken in Highland County.

Rockfish Valley Trail is one of the only places in Nelson that gets regular coverage in migration.  Just across the border in Augusta County, State Route 610 also used to get regular coverage, by Edward Brinkley.  He reported massive fallouts of migrating songbirds, including some rare species, like golden-winged, blue-winged, and Connecticut warblers, and olive-sided flycatcher.  More recently, I’ve had good numbers of birds on foggy days in fall, although nothing yet approaching what he reported.  The number and variety of birds that can be observed when an area is thoroughly covered by birders is amazing.  Here’s one of Edward Brinkley’s best lists:  https://ebird.org/view/checklist/S12891616 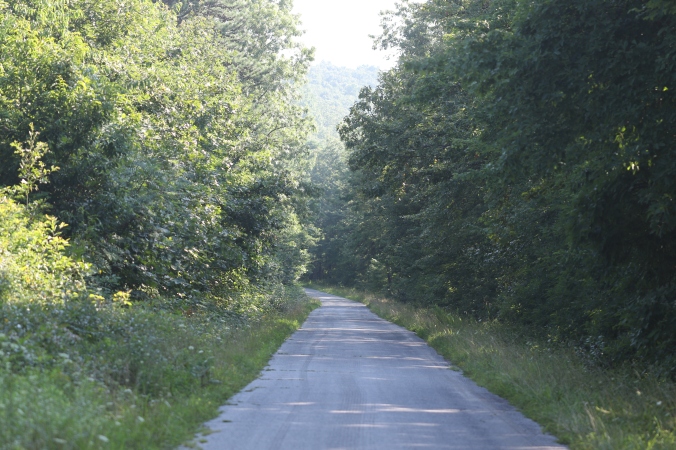 State Route 610 during the summer.

I wonder how many more rare migrants are out there along the Blue Ridge that we don’t detect?  How many more fantastic migrant trap locations like Rockfish Valley Trail and State Route 610 are waiting to be discovered?  If birders birded all of Nelson County in one day, how many species and how many individual birds would we find?  I think the format of a rarity roundup provides a good way to encourage people to explore and begin to answer these questions.

I’ve divided Nelson County into 18 territories of unequal size and shape.  They’re drawn somewhat randomly, but I’ve tried to make the boundaries logical and to make it clear what territories the already well established birding spots lie in.  My hope is that I can get as many people or teams as possible to commit to bird a territory as thoroughly as possible for the day of Sunday October 6.  The territories are humongous compared to the one’s used for the VA Rarity Roundup in Northampton, and have much more private land, so I recognize that thorough coverage will be impossible.  The idea is more to use the territories as a broad organizational tool, so birders can split their effort across the county.  Some territories don’t have an eBird hotspot in them.  Some may not even have public land, which is OK.  There’s a lot of barely traveled backroads in Nelson, many of which could prove to be good birding.  How many new eBird hotspots can we add?

If you’re a birder, and interested in helping discover birds and birding hotspots in Nelson County and are available on October 6th, please consider covering a territory!  Here’s a link to a map of the territories.  Covering any of them would be a huge help, although I’m personally most curious about the territories along the Blue Ridge that don’t get birded, like 12 and 13.  I also think the territories along the James River, including the one with James River State Wildlife Management Area, could be interesting and productive.  Don’t worry if you don’t get your first choice territory, because I’ll be making a text group so we can alert each other to any rarities we find.  Once you know which territory you would like, or if you have any questions, contact me at ezraperegrine@gmail.com.

James River State Wildlife Management Area is the eBird hotspot with the third most species in Nelson County, with 132, and many more still waiting to be recorded.  It still isn’t getting birded as much as it deserves, with only 67 complete eBird checklists at the time of this writing, but over the last year the coverage has improved.  It’s one of the only publicly accessible marshes in the county, which makes it a particularly important spot for local birders to check, especially in migration, when rare marsh birds like rails and bitterns are moving through the area.

There is often hunting at the WMA during the winter, so you may want to wear blaze orange.  According to the Virginia Department of Game and Inland Fishery, Sunday is the only day they never have hunting.  One winter day we planned to bird there, but hunters and their dogs lined the road all the way from the entrance to the river.  We turned around.  Also, as for all state WMA’s, you should purchase an access permit before your trip.

If you follow the main road all the way to its end, you arrive at a small dirt parking lot next to the James River.  Sometimes in winter, if it’s very cold, ducks can be seen on the river there.  Species I’ve had on the river include common merganser, hooded merganser, and ring-necked duck.  Tall silver maples and eastern sycamores grow along the bank of the James, and in the spring both yellow-throated and prothonotary warblers can be heard singing from them. 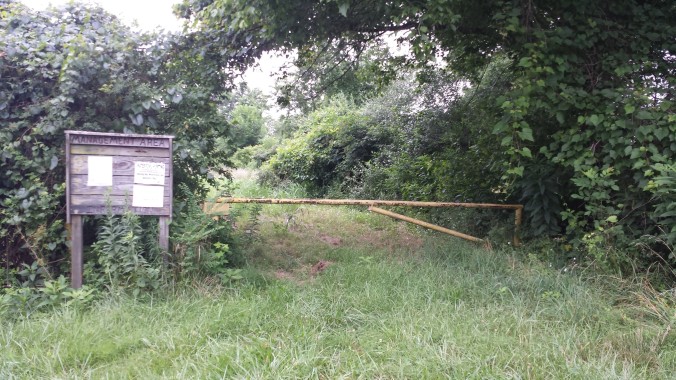 Entrance to the Marsh Impoundments

One of the best places to bird at James River State WMA is the marsh impoundments, which are located near the end of the main road.  The entrance to the path that leads through the marsh is about 30 meters back up the road, and on the left coming from the river.  Wood ducks are present in the marsh all year, and in the winter they are often joined by other species of duck.  I’ve had ring-necked duck, mallard, and American black duck in winter, and in March and April, blue-winged teal are abundant.  Common yellowthroats, orchard orioles, white-eyed vireos, red-winged blackbirds, indigo buntings, and green herons all probably breed, and are common all summer.  In spring, northern waterthrush, marsh wren, and warbling vireo are possible.  There’s even a record of alder flycatcher and common gallinule from late May in 2010. The marsh can have shorebirds in the spring, but it depends greatly on the water level.  If the water is too high, then there is almost no exposed mud and few shorebirds.  Greater yellowlegs, lesser yellowlegs, spotted and solitary sandpipers, and Wilson’s snipe have all occurred there in the past.  No one has yet found a rail or bittern, but I believe if people continue checking regularly it is only a matter of time. 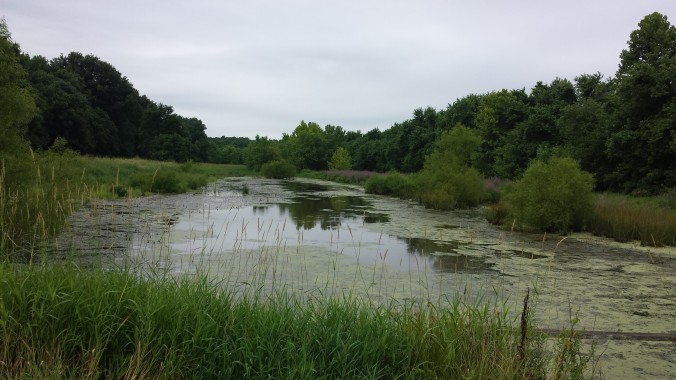 From the end of the marsh it is possible to keep walking on the path, which leads back into the forest.  It gets very overgrown, and I’ve found the best way to get back to the road is to walk next to the train tracks that intersect that path.  If you follow the tracks, you’ll arrive back at the main road of the WMA just a little bit past the entrance to the marsh impoundment path.  Usually the birding isn’t much different from the rest of the WMA along this path, but I’ve had Philadelphia vireo in fall, and rusty blackbirds and yellow warblers in the pools of water along the train tracks.

Continuing up the road, away from the river, but before you get to the train tracks, several large, weedy fields lie to the left.  Yellow-breasted chats and northern bobwhites breed in these fields, although the former is much more abundant than the latter.  In May, bobolinks can be present.  This is also a good area to keep an eye out for red-headed woodpeckers and blue grosbeaks in the field to the left, and listen for pine and prairie warblers singing from the pines on the right. 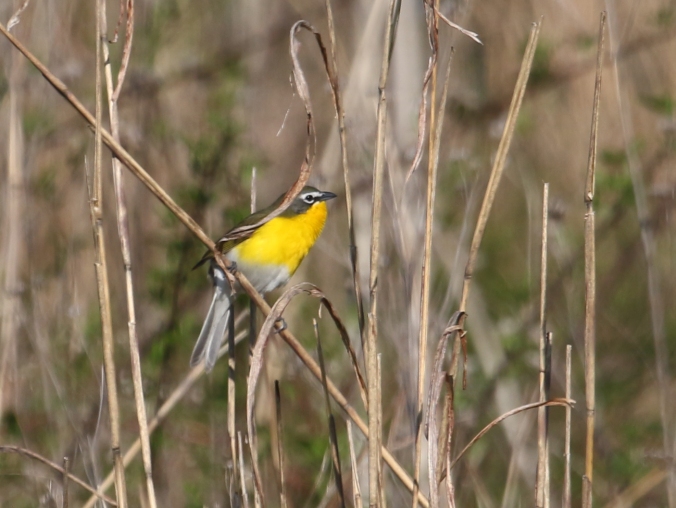 Past the train tracks the field continues on the left, although it is more overgrown with autumn olive and other invasive species.  Blue grosbeaks, yellow-breasted chats, indigo buntings, white-eyed vireos, and common yellowthroats are still fairly abundant though.  A power line right-of-way crosses the road about 500 meters west of the tracks, and it can be used to access the field.  If you do walk down the right-of-way to the left of the road, you’ll eventually encounter a small pond on your left.  In the summer the vegetation is often so high and dense that it’s impossible to see from the right-of-way and nearly impossible to get to, but it might be worth a check in winter and migration.  However, the only birds I have seen on it are wood duck, green heron, belted kingfisher, and swamp sparrow, which are all abundant elsewhere in the WMA.

Join 94 other subscribers
Follow Birds and Buds on WordPress.com