We stood at the intersection of Briery Branch Road and 85, near the summit of Reddish Knob, watching and listening to the red crossbills feeding all around us.  Crossbill flocks roved about the mountaintop, chattering and singing constantly.  Some birds dangled from the cones of table mountain and pitch pines, using their long, sturdy, crossed bills to pry the seeds out from deep within the cones.  Other crossbill flocks gathered in the dirt road not more than five feet in front of us, squabbling and moving constantly as they ingested little bits of gravel to aid in their digestion. 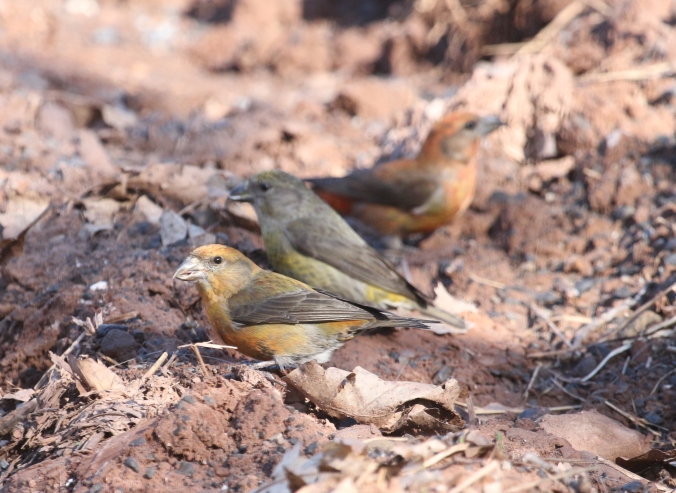 Red crossbills are fairly rare throughout most of Virginia — they are most common during irruption years, when large numbers come north during the winter — but they can usually be found in the tall mountains along the VA/WV border in Rockingham County.  The crossbills are present all year round, including the breeding season, and have raised young successfully in the Reddish Knob Area before.

The red crossbill is an extremely complex species.  Many subspecific taxa, commonly referred to as crossbill “types” have been named, and it is possible that some of them will be elevated to species status in the future.  Indeed, just this past year the Cassia crossbill — endemic to one county in southern Idaho — was split out from the red crossbill.  One of the most variable features of crossbill types is bill size, as it seems different types have evolved different bills to allow them to specialize on different conifer species.  The types also differ in body size and call.

The red crossbills at Briery Branch Gap had previously been recorded and identified as Appalachian red crossbill (type 1), but I wanted to make sure our birds were as well, so I took some recordings.  When I got home, I sent my red crossbill recordings to Matt Young, a scientist who’s been studying them.  He told me that I had recorded both type 1 and type 2, the ponderosa pine crossbill, which had not been documented in Virginia recently. 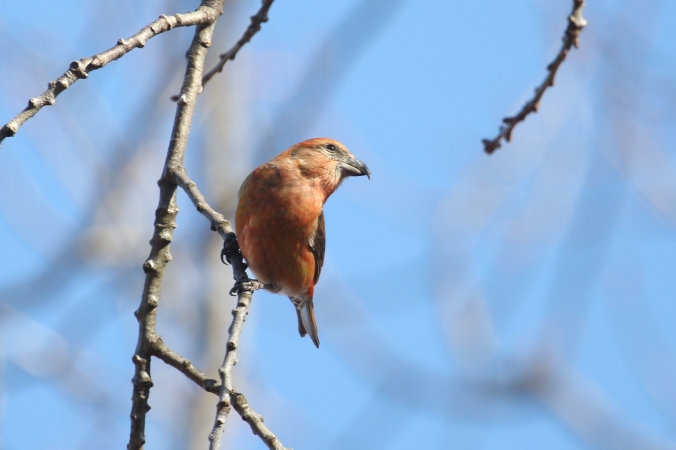 Seven young birders had met for the Blue Ridge Young Birders Club field trip to Briery Branch Gap early in the morning at the Rockfish Gap Hawk-watch.  The trip to Briery Branch was uneventful until we got to Airport Road, just south of the town of Bridgewater, in Rockingham County.  Suddenly, three massive, lightly-colored birds crossed the road in front of us.  I only got to see them for a few seconds before they were obscured by the trees, but I had enough time to make out their huge, black-tipped wings, light bodies, tiny tails, and massive bills.  They were American white pelicans, a 2nd county record.

We encountered the flocks of red crossbills as soon as we got to the pull off for Briery Branch Gap.  It was by far the most I’ve ever seen at once, and the best views.  After the crossbill show, we walked up forest road 85 in search of other mountain birds.  Pines, hemlocks and oaks grew over a dense layer of mountain fetterbush next to the trail.  Blue-headed vireos, dark-eyed juncos and black-capped chickadees sang from the branches.  We walked into a field surrounded by red spruce and eastern hemlock.  A few more red crossbills flew over our head, accompanied by American goldfinches and pine siskins.  Black-and-white warblers sang their whispery, greasy wheel song.  Someone flushed an American woodcock, which flew twenty feet and then landed deep in a fetterbush colony.  We decided we should turn around so we’d have time for a few stops in the valley on our way home.

For some reason, the field at the end of Lumber Mill Road in Dayton is one of the most reliable places in the valley for the introduced Eurasian collared dove.  Why the doves prefer this particular manure-covered field to a million exactly like it all over Rockingham County is beyond me.  We found three Eurasian collared doves perched on the powerlines next to the road. 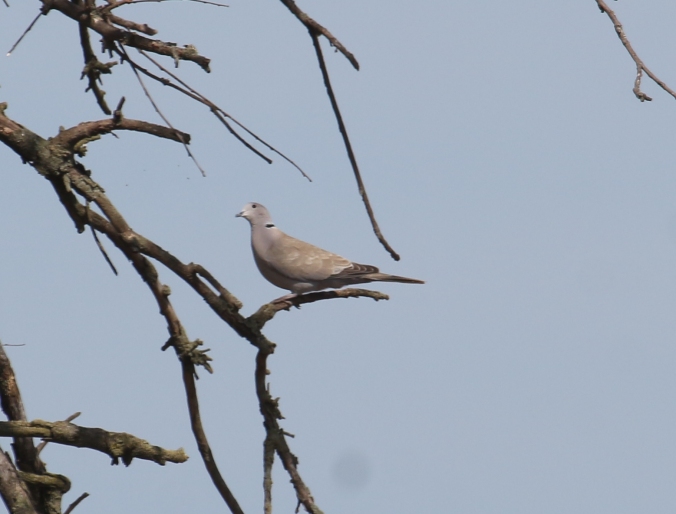 Our final stop of the day was Oakwood Pond, where we found two pectoral sandpipers.  We headed home, happy with our morning’s birding. 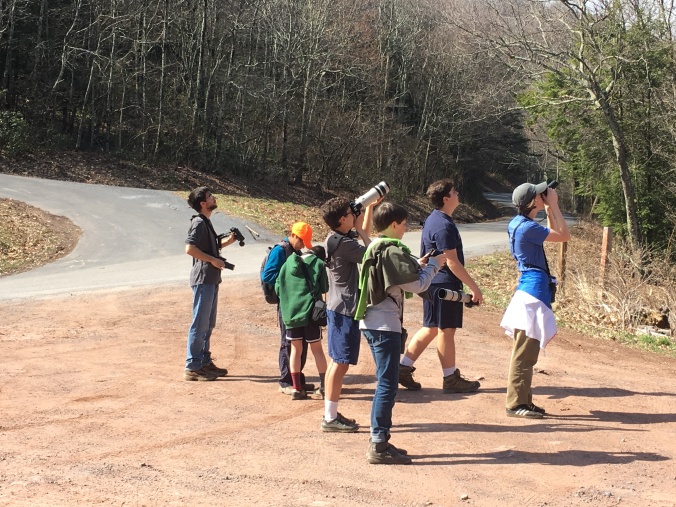 Our group photographing the red crossbills.

I finally made it up to Briery Branch Gap, on the Virginia-West Virginia border, again.  It’s the only place in Virginia where Red Crossbills are seen regularly.   The last time I came up here, in March, we didn’t see any Crossbills, even though large flocks of them had been seen recently.  Snow covered the ground that day, but the air was warm enough (about 50 degrees), so we figured we’d be fine.  As we started up the trail, a group of huge, noisy, monster trucks came roaring through the six inches of muddy slush and snow carpeting the narrow dirt road.  Well, so much for being dry, but the sun was still shining and it was still warm (relatively), so we kept walking.  As we got up to the campground where the Crossbills usually are, a dark, ominous, storm cloud started to roll in from West Virginia.  The temperature dropped noticeably, and it started to drizzle.  I did my best to ignore these signs, despite faintly remembered warnings about rapidly changing mountain weather.  The further we hiked, the colder it became.  We navigated around huge pockets of mud colored slush covering deep pools of frigid water.  My foot slipped into one of these pot holes.  It started to rain — cold, hard, persistent rain, soaking our long sleeve shirts and threatening to ruin our cameras.  We turned and ran for the car, which was, unfortunately, at least half a mile away.  Both of my feet were numb.  I couldn’t feel them as I ran clumsily down the mountain.  Right as we got to the car, the rain stopped and the sun came out.  The temperature rose twenty degrees and the snow started visibly melting.  I had a hard time believing that just a few minutes ago, we were in the middle of a winter storm.  Looking down at the thick blanket of dark clouds in the valley far below us, though, I could see where the storm had gone.  Needless to say, no Crossbills that day, but I did enjoy seeing interesting high-elevation plants, such as Mountain Fetterbush and Red Spruce, and strange, introduced, exotics, such as Red Pine and Norwegian Spruce.

This time, in April, the snow was all gone.  We got out of the car and ate lunch.  As we were finishing, we heard the distinctive flight call of a Red Crossbill in a large Chestnut Oak just on the other side of the hill.  I tried to find the bird, but ended up walking in a big circle.  Fortunately, my brother spotted a male sitting on top of a little clump of sumac a few feet from us.  It stayed still and let us photograph it for awhile, before flying onto the road right in front of us, to peck at the gravel.   Crossbills are very approachable when they “gravel,” and this one was no exception, as I was able to get within ten feet of it. 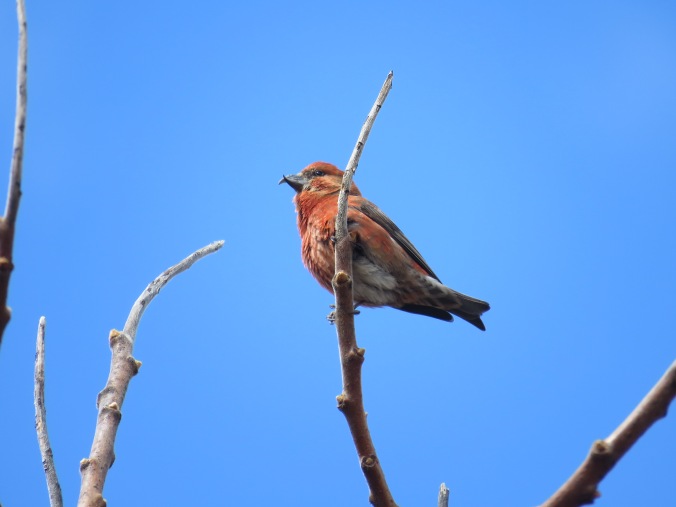 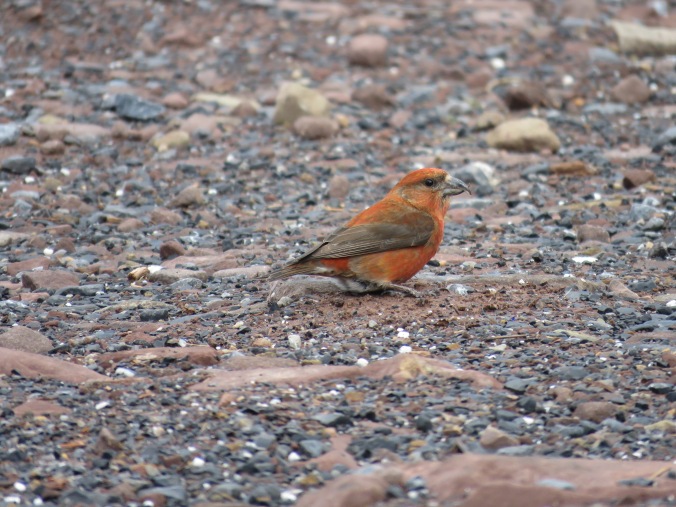 After the Crossbill flew away, we had a nice, thankfully rain free hike (not that we were so unprepared this time!), up the road for a couple of miles.  We saw the usual high elevation species, like Red-breasted Nuthatch, Black-capped Chickadee, and Common Raven.  There were also many Fox and Chipping sparrows.  When we got back to the car, we heard two Blue-headed Vireos singing.  We quickly found these beautiful birds and enjoyed looking at them until we had to go.