I woke up at 4:00 AM on January 17th, excited for our trip to Amagusa Reserve, one of the only places in the world where the recently discovered Choco vireo can be seen.  I sat up suddenly in bed, and my eyes rolled.  I felt horribly nauseous and dizzy.  This was not a good thing on one of the days I was most excited about, but I got dressed as fast as I could, grabbed my birding stuff, and shoved my feet into my stiff, damp boots.  I staggered down the dark, wet stairway outside, towards the road.  Upon entering the van, my stomach lurched again, and I collapsed on a whole row of seats with my head in the corner.  For some reason, the only thing I could think about on the long, painfully twisty, dark drive to Amagusa was the potatoes I had eaten last night.  They hadn’t tasted that bad then, just a little strange, but now, even the thought of them was revolting.  I settled back into a restless half-sleep, my dreams infested with rancid potatoes.

Luckily, by the time we arrived at the beginning of the Mashpi entrance road two hours later — one of the most important places near Amagusa Reserve — I was feeling well enough to bird.  We walked to the edge of a cliff, looking down at the lush tops of the trees below.  A yellow-bellied siskin and a swallow tanager sat on top of the tree in front of us, while an energetic purple-crowned fairy flashed around the tree’s flowers.  We spotted a female orange-breasted fruiteater, an interesting looking green bird with an orange bill.  We began to walk slowly down the road, stopping periodically to scan mixed flocks.

Looking out over the misty valley, I saw three rose-faced parrots climbing around in a tree in the distance.  I had heard of the rose-faced parrot, but I hadn’t expected to actually see this beautiful bird, so this was a special treat.

We came to a heavily wooded bend in the road, where a steep hill rose up on one side and dropped away into the valley on the other side.  Our guide told us this was a good spot for indigo flowerpiercers, a particularly uncommon Choco endemic.  Maroon-tailed parakeets flew around in the dense foliage, always just behind or under something.  The quiet, multi-toned whistle of a black solitaire cut through the air, coming from trees further up on the slope.  Forgetting about our failed attempt at an indigo flowerpiercer, I looked up at the slope where the whistle had came from.  I could just make out the form of several all black thrushes with white cheek patches, heavily obscured by brush.  Then one hopped into the open, and I could see its red iris and white shoulder feathers.

As we walked toward the next bend in the road the sounds of a mixed flock grew louder and louder until chattering birds were all around us.  Birds flew from the cliff above us to the tops of the trees below us on the other side of the road.  Suddenly, Sergio, an owner of Amagusa Reserve, tensed and said something in Spanish to our guide ending with “Choco vireo.”  It turned out he had recognized it by its call, and we soon located two Choco vireos foraging in the top of a broad-leafed tree on the slope below us.

This is my atrocious picture of the Choco vireo, but because of the bird’s rarity, I decided to include it anyway.

Paul Salaman and Gary Stiles discovered the Choco vireo in the 1990’s, surprisingly recently for an entirely new species of bird.  They had the brilliant idea of auctioning the rights to the bird’s name to raise money for habitat conservation.  The Choco vireo’s scientific name became Vireo masteri, after Dr. Bernard Master, whose donation went toward establishing and maintaining a reserve where the species was first discovered in Columbia.

I was thrilled to see this drab bird because I had barely hoped we’d see one because it is so rare.  Once the vireos left, we continued scanning the flock, finding a moss-backed tanager and a barred becard.

A half-hour later, we arrived at the Amagusa Reserve feeders.  We sat at a table eating breakfast while we watched logs where bananas had been put out for tanagers.  Soon, ten tanager species were coming to the bananas, the colors in their plumages glistening and gleaming like gems. 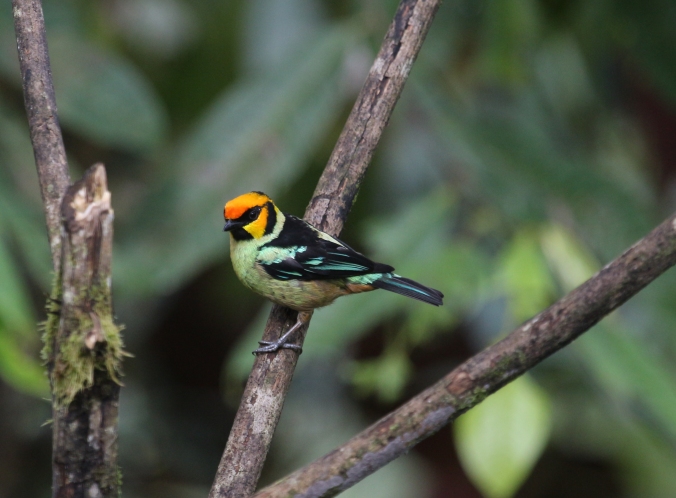 Cinnamon, black-and-white, and one-colored becards hunted behind the feeders, while a black-billed peppershrike called from a distant bush.  Several of the tanager species present at the feeders were Choco endemics, such as glistening-green and rufous-throated tanagers. 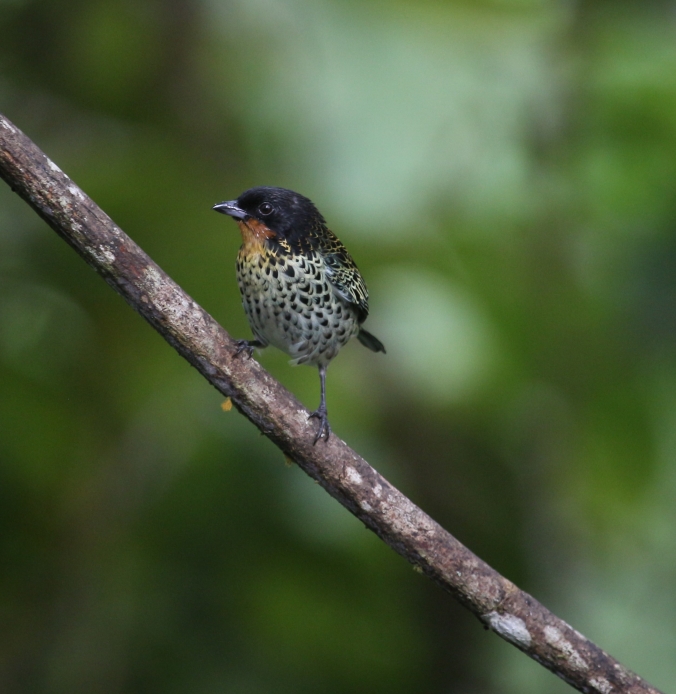 Even though we had already seen most of these tanager species in Ecuador, seeing them so close was an amazing experience.  Every little detail of their plumage was visible, from the black scales on the breast of the rufous-throated tanager to the brilliant yellow bodies of the golden tanagers.  I was able to get great photos of many species that are usually only glimpsed at the tops of trees.  My stomach also felt completely normal for the first time that day, and the strange dizziness did not come back.