Every year, my family makes a trip to Emerald Isle in the outer banks of North Carolina. This year, one of the birds that I most wanted to see was the secretive Bachman’s sparrow of southern pine savannas.  Two young birders from the Carolinas whom I met in Glacier National Park earlier this summer told me that the most reliable spot to find Bachman’s sparrows nearish Emerald Isle was the Green Swamp Preserve in Brunswick County, near the border of South Carolina.  A quick look at ebird confirmed this information.  The Nature Conservancy’s website’s claim of “many orchids and insectivorous plants” was all the extra encouragement I needed to make the two-hour drive.   When we pulled into the small dirt parking lot, it was already getting hot.  We briefly scanned a small pond next to the road, and found one anhinga, an overdue NC lifer for me.

As we started down the trail, the sun beat through the sparse canopy of longleaf pine.  After awhile, the path started to become more wet and boggy.  Theo spotted the first venus flytrap growing in a little muddy ditch.  A few minutes of searching revealed many more, in small sphagnum clumps, their colors and sizes ranging from little green plants just an inch wide, to three or four inch plants with rich red traps.  This photo shows one of my favorites. 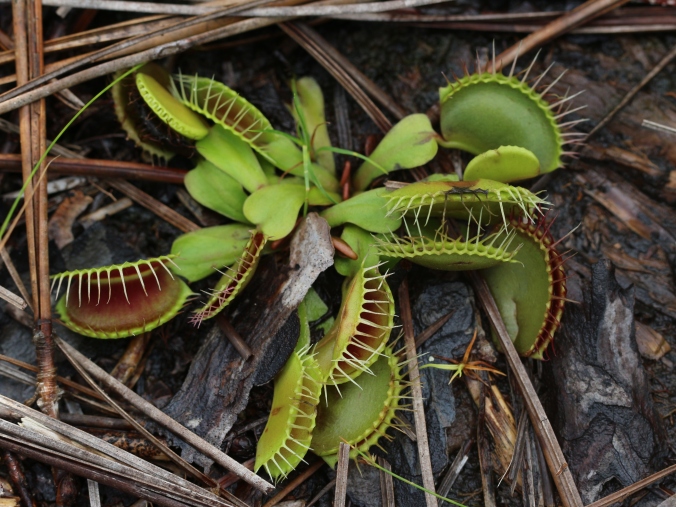 The dense clumps of pineland threeawn grass thinned out more as the ground became boggier.  I saw some tiny bug eaten yellow pitcher plant clumps, and rushed to photograph them.  Just as I was almost there, I spotted a small brilliant orange lily in the grasses.  Correctly assuming it was pine or Catesby’s lily, I switched plants and went to photograph it.  What a colorful little lily. 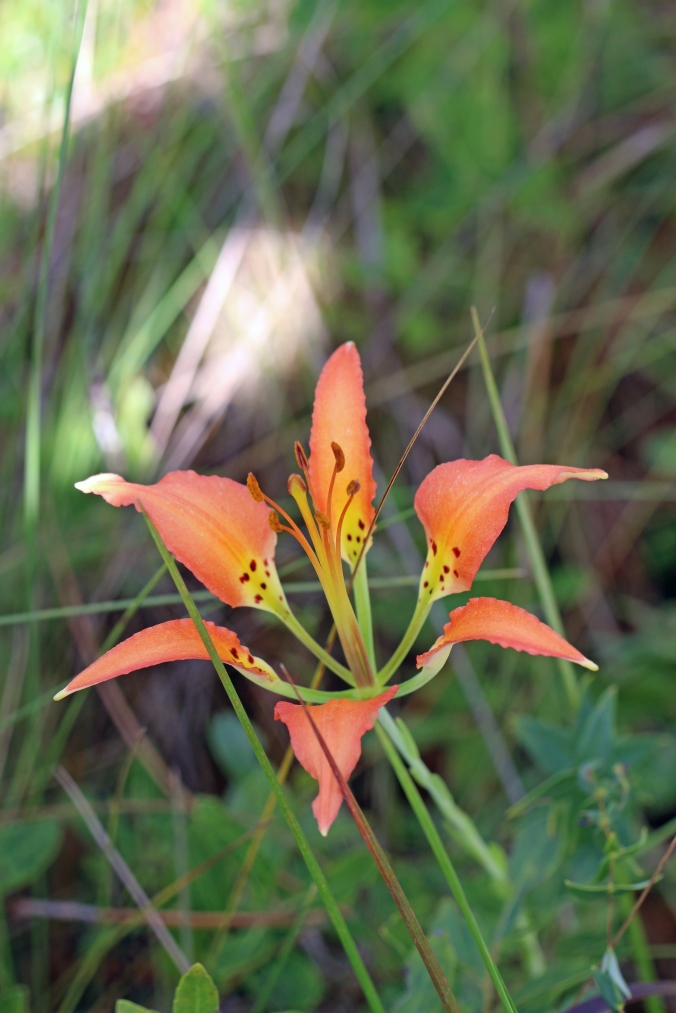 Next to the yellow pitcher plants, there were several southern purple pitcher plant clumps, their foliage tinted a deep red from the relentless sun.  I have seen the purple pitcher plant species in West Virginia, but those plants belonged to the northern subspecies, (Sarracenia purpurea subsp. purpurea), not the southern subspecies (Sarracenia purpurea subsp. venosa) that grows in pine savannas.  Over the pitcher plants, the tall, white, ball-shaped flowers of ten-angled pipewort bobbed back and forth, disrupted by my movement.  I looked up in time to see a female Amanda’s pennant flit up and perch on a stick, a lifer Ode for me.  Poking around the clump of grass, the orange inflorescence of an orange fringed orchid caught my eye.  I would have been thrilled about this only a few days before, but we had stopped and photographed a roadside colony in Croatan National Forest on the drive to Emerald Isle.  The orchids I was really hoping to see were the other platanthera  species that grow in savannas like this, such as white-fringed, yellow fringeless, or orange crested.  Despite my previous sighting, it was still an exciting plant, and maybe it was a good sign of better things to come. 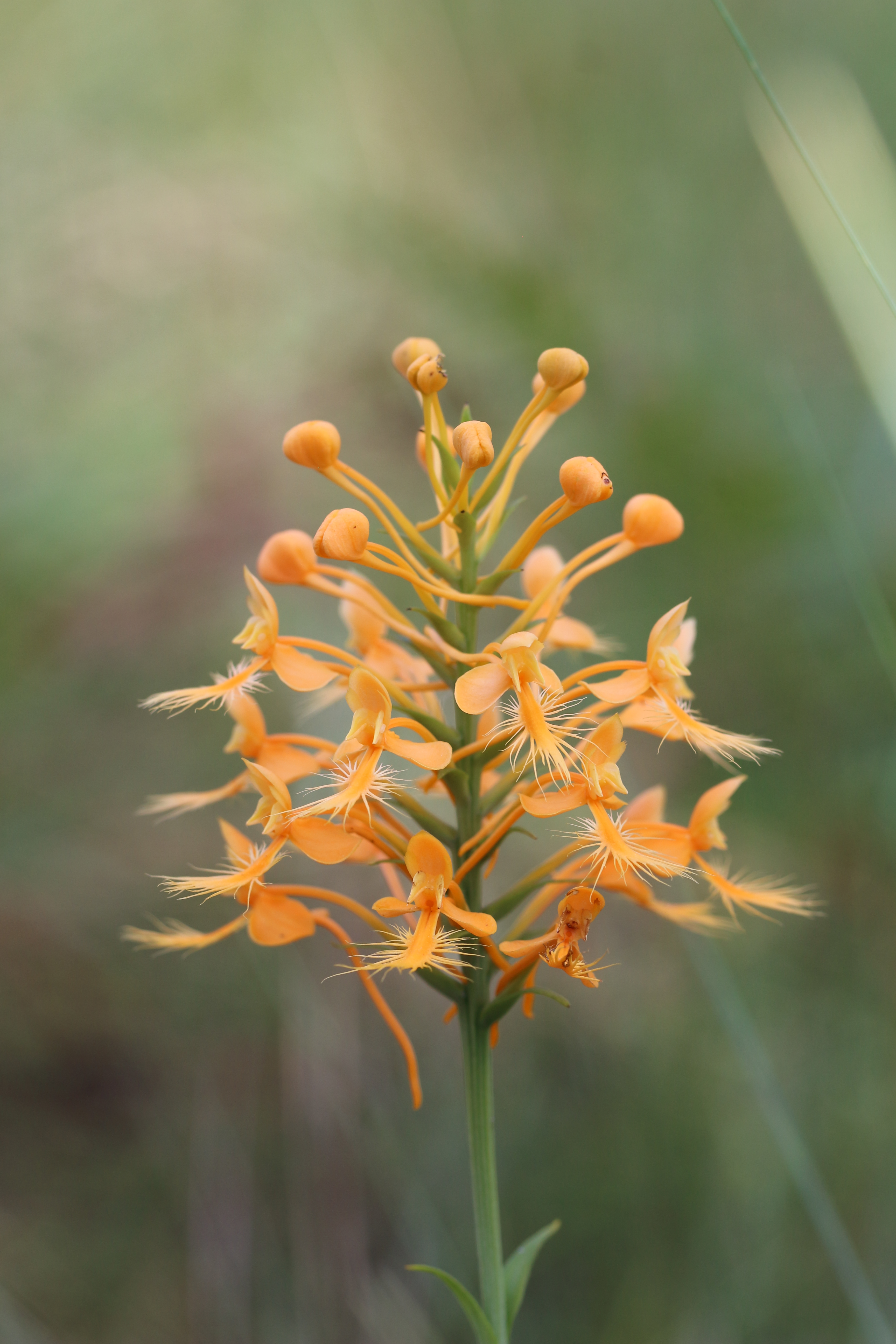 The longleaf pines opened up even more as we walked through a brightly lit glade.  Large, lush carpets of pineland threeawn grass and other herbs carpeted the wet ground, interspersed periodically with the bright spike of an orange fringed orchid.  Huge clumps of healthy, yellow pitcher plants rose out of the grass.  It’s been a few days, but I don’t think I’m exaggerating in saying that some were more than 2 1/2 feet high!

Grass-leaved Barbara’s buttons, blazing star, elephant’s foot, many species of meadow beauty, and other colorful flowers bloomed in the meadow around us.  We finally found a clump of hooded pitcher plants almost buried in the grass.

Nearby was a small red pitcher plant group, completing our four pitcher plants for the day.  Leaving the sunny glade behind, we plunged into a thick tangle of southern swamp growth.  By this time, the trail was a stream of blackwater bordered by impenetrable vegetation.  We could not see when the path would leave the swamp, and indeed didn’t know if it would.  We pressed on, as we didn’t yet have our guaranteed Bachman’s sparrow, the original reason for this trip.  We continued through a series of openings into the longleaf savanna and than plunged back into the dark, wet, swamp.  In one such opening, we heard the high, trill of a Bachman’s sparrow and then spotted it.  I had thought they wouldn’t be singing this time of year, so I was quite surprised to hear it.  We were able to watch the bird for a long time, before it finally hopped back off its branch and returned to the grass.

A few plants still eluded us, so we decided to follow the trail to its end.  That was a mistake.  Just as we were finally getting ready to turn around, my brother strayed a little further down the trail.  When he came back, his legs looked like they were covered in dust.  He had stepped in a tick nest for the third time this summer!  I did the natural thing, looked down at my legs, and was hardly surprised to see that I had some on me as well.  But just a few hundred, nothing like Theo or my dad.  After half an hour of inefficiently picking ticks off our legs, we decided to go back and try not to worry about the rest till we got to the beach house.  Walking back through one of the forest openings, I found this one, pathetic, tiny, awful, old, orange crested orchid.  It isn’t much for a life plant, but it is the only one we found. 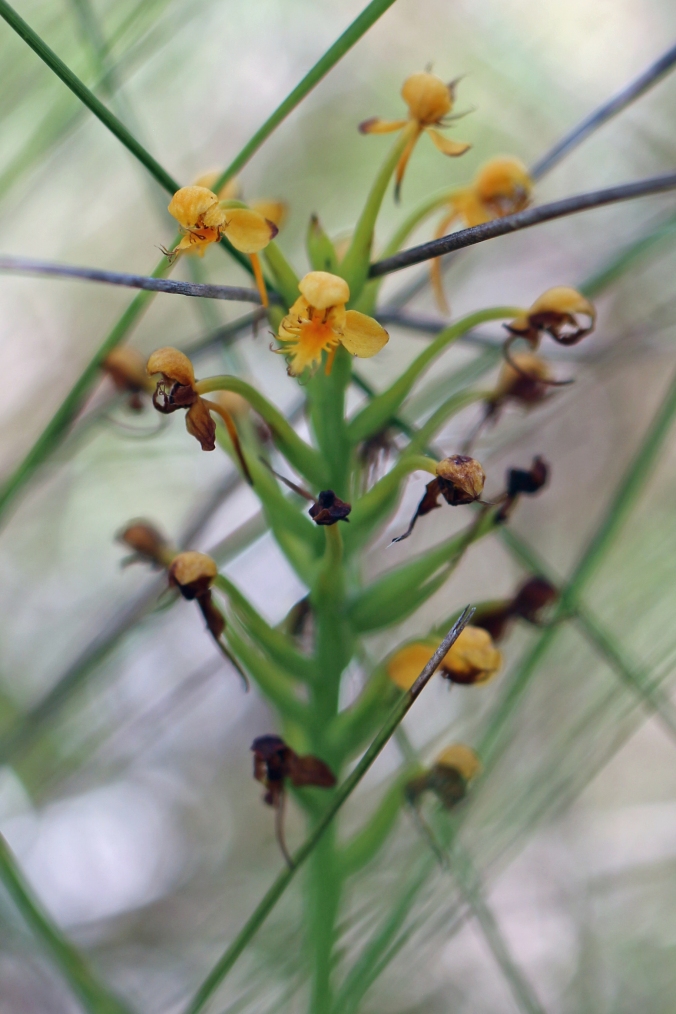 An excellent trip, minus the ticks.