Northern bobwhites are a small, round bodied species of quail with short legs and tails. Their bodies are finely patterned with bold rufous, brown, black and white markings. Most bobwhite populations have a striped white and black head, with a white throat, dark eye stripe, white supercilium and dark crown. The only exception to this head coloration is the endangered subspecies masked bobwhite (C. v. ridgwayi) of southern Arizona, which has an entirely black head.

The coloration of male northern bobwhites varies significantly across their range, while females look similar. Eastern males have rich rufous colored chests and flanks and a light brown back. Males from the Southeastern U. S. are much darker overall, with a nearly black chest and very little rufous on the flanks. Western birds are paler, with some light rufous underneath and a pale gray back.

Northern bobwhites are the only quail throughout the eastern part of their range; however, they do overlap with scaled and Gambel’s quail in the West. Where they overlap with other quail species, bobwhites can be easily identified by their smaller size and brighter coloration, including their rufous chest and striped head. 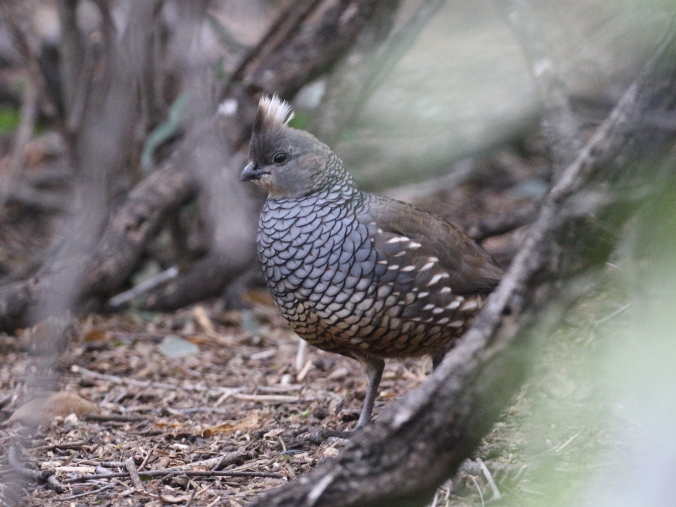 Northern bobwhites occur naturally in most of the eastern United States, roughly from Massachusetts to South Dakota and south through Colorado, New Mexico, and Texas to Florida. They also can be found on many of the Caribbean Islands and south through Mexico to Guatemala. Bobwhites have also been introduced to other parts of the world — including the Pacific Northwest and Europe — as a game bird.

In Virginia, northern bobwhites can be found statewide, although in many areas native populations have declined precipitously since the 1970s. Bobwhites are fairly rare in the Shenandoah Valley, becoming increasingly frequent as you travel east through the Piedmont and Coastal Plain. There are quite a few around Scottsville in eastern Albemarle, although some of these birds are likely hunting releases.

Northern bobwhites need early successional habitats — various natural grasslands and savannas — to do well, and the decline of these habitats in Virginia is probably a large cause of their decline. These kinds of prairies and open forests are maintained by disturbances, such as clear cutting or burning. Two plant communities that bobwhites rely on in Virginia are Piedmont prairie and loblolly pine savanna. Difficult Creek Natural Area and Piney Grove Preserve are two preserves in Virginia that exemplify these two plant communities respectively.

Piedmont prairies are a particularly diverse form of natural grassland, which makes them great habitat for bobwhites. The rich assemblage of flora that can be found in these disturbed habitats is often dominated by many species of grasses, legumes and asters. Since there are so many species of native plants, there are also many insects and seeds for the bobwhites to eat. The dense herb layer also provides cover from predators.

The diversity of flowering plants found in good bobwhite habitat also makes great habitat for pollinators. Many species of native butterflies, bees and wasps would also benefit from the restoration of natural grasslands. 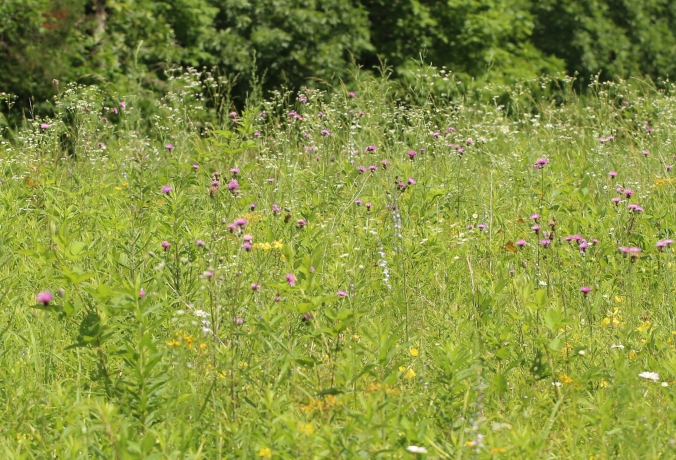 Bobwhites feed mostly on seeds and nuts in the fall and winter, but in the summer when they are raising chicks, they also eat many insects. Preferred seed sources include asters, legumes, grasses, pines and oaks.

Like other quail species, bobwhites live in groups — called coveys — of 3-20 birds. Coveys feed and sleep together, and they get along peacefully for most of the year, except during the breeding season when males fight for mates.

Nests are a shallow, grass lined scrape on the ground. Bobwhites often weave grasses over the nest into a canopy, forming a dome like shape. Typically, there is only one brood per season, but up to three have been recorded. Clutch size is large, usually more than 10 eggs. The young fledge after two weeks.

As mentioned above, northern bobwhites used to be a common bird in the eastern United States, but their populations have declined by 85% in the past 40 years, according to the North American Breeding Bird Survey. The IUCN Red List currently considers them “near threatened”. These declines have been attributed to widespread loss of the early successional habitat that bobwhites favor to development, forest succession, and more land intensive farming practices. Historically, the Piedmont of Virginia held extensive natural grasslands. What little remain today are widely scattered and fragmented. Bobwhites are only one of the many animals and plant species that rely on these incredibly biodiverse habitats.