Every day that we were in Mindo it rained, usually starting around 1 pm.  Despite the constant downpour, we still went out after long mornings of birding to hike, hoping to see even more birds.  Towards the end of our trip, though, the rain and our tiredness made my brother and me more receptive to a suggestion my parents had made on our first day: take a chocolate tour.  That afternoon, we walked to El Quetzal de Mindo, a restaurant, artisanal chocolate factory, and lodge on the edge of town.

Our tour was led by an energetic Portuguese man named Sergio.  He started the tour by showing us examples of cacao in various stages of production, and giving us a brief overview of the process.

Sergio then led us out into the central courtyard of the chocolate factory, and to a small garden.  They had a few young cacao trees on display in the garden, as examples of what they look like, since Mindo is too high and cold for chocolate to do well. 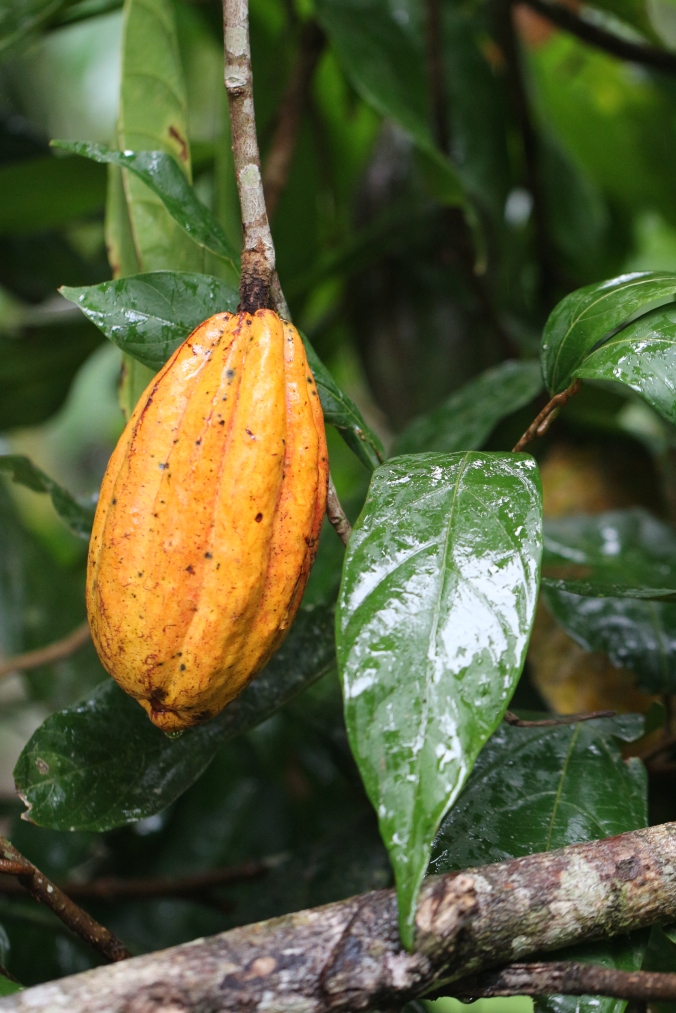 The cacao tree (Theobroma cacao) is a small, compact tree, at least when it’s cultivated.  It has broad, glossy leaves and flowers consistently throughout the year, as is typical of many tropical trees that do not have to worry about seasons.

The flowers are tiny and pop right out of the trunk and larger branches, giving the tree an abnormal appearance. 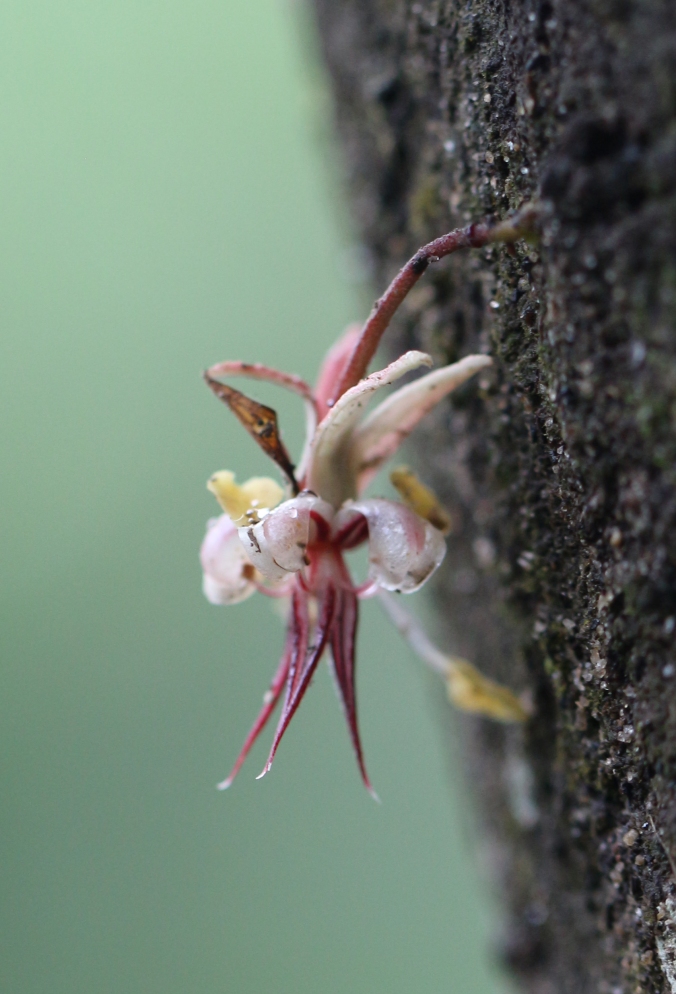 If a flower is pollinated by a cacao midge — various species in the genus Forcipomyia — it ripens into a long, grooved, orange, pod.

One of the other people on the chocolate tour mentioned that they’d heard that chocolate was in danger of going extinct.  Sergio said something about the cacao midge declining, worrying Ecuadorian authorities.  This statement piqued my curiosity, so I did a little research.  It soon became obvious that cacao is in no danger as a species, but there are some concerns for the well-being of the cacao industry.  Climate change is likely to move and reduce suitable habitat for both cacao and its only pollinator.  Cacao does best in humid climates with lots of rain and warm, stable temperatures — it is well adapted to its home in the lowland rainforests of South and Central America.   Despite cacao’s origin and long history of use in tropical America, the majority of industrial cacao production is in West Africa.

One frequently cited study forecasts that the region suitable for cacao production in West Africa, where two thirds of the world’s cacao is produced, will move uphill into the mountains as the climate becomes drier, due to climate change.   This smaller and more inaccessible territory would be a problem for the Ivory Coast, especially, as according to Wikipedia, 40% of their national export income is from cacao.   Drier conditions are also a serious problem for cacao midges (Forcipomyia), the only bugs that can pollinate cacao.  They are adapted to moist, shady conditions, as is the cacao plant itself.  They need rich, damp leaf litter to complete their life-cycles.  The midges’ need for moisture is already causing the chocolate industry problems due to the industry’s favored growing technique of large monoculture plantations.  When cacao is planted in large plantations with no other trees, it creates a drier micro-climate, without good leaf-litter.  These dry conditions result in the pollination rate of plantation cacao flowers being only .3%.

Both present and future problems with cacao production could be partially addressed by cultivating cacao under a canopy of native rainforest trees on smaller farms instead of on large monoculture plantations.  The additional trees create a damper microclimate, which the cacao trees need to thrive.  Shade grown cacao farms have a much higher pollination rate, because the cacao midges also prefer the dampness and leaf litter that the larger trees offer.  Shade growing cacao could also help combat the effects of climate change on the cacao industry by creating damper conditions in an overall drier climate.  Furthermore, trees in cacao “agroforests” sequester more carbon than cacao monocultures, providing an opportunity to address climate change at its roots.

Although agroforests are not a substitute for primary rainforest, their greater plant diversity provides much better habitat for many species of insects, amphibians, birds and other creatures than plantations, while still producing a similar cacao bean yield.   Shifting from plantations to shade grown cacao could become increasingly important in the future if pressures continue to reduce primary rainforest habitat.   Many species of neo-tropical migrant songbirds, such as the warblers that breed in the Appalachian Mountains near where I live, need rainforest in Central and South America for wintering habitat and agroforests could meet some, but by no means all, of this need.

“Bird friendly” shade grown coffee has become relatively well-known recently, with several organizations developing certification programs so that buyers know they are getting a more environmentally friendly product, and growers can charge a premium price.  Certifications for shade grown cacao don’t seem to have made it as much into the main stream, although I did find one program, Forest Chocolate, that certifies organic and shade grown chocolate.  Fair trade chocolate, in general, is more likely to be shade grown since it comes from smaller producers.

Back in the chocolate factory, Sergio showed us the ripe, unprocessed cacao pods.  The cacao “beans” were lined up in rows, and coated with thick, white pulp.

Sergio pulled a seed out of the pod and gave it to us to suck.  The pulp tasted like a fruit and not at all chocolatey.  The first step in making the chocolate is to scoop all the pulp and cacao “beans” out of the pods and dump them into a sealed cedar box to ferment.

Once the chocolate pulp has fermented for a few days, it is scooped out of the boxes onto open trays in a greenhouse to dry.  By this point, most of the pulp has rotted off, and the inside of the beans is beginning to smell similar to chocolate. 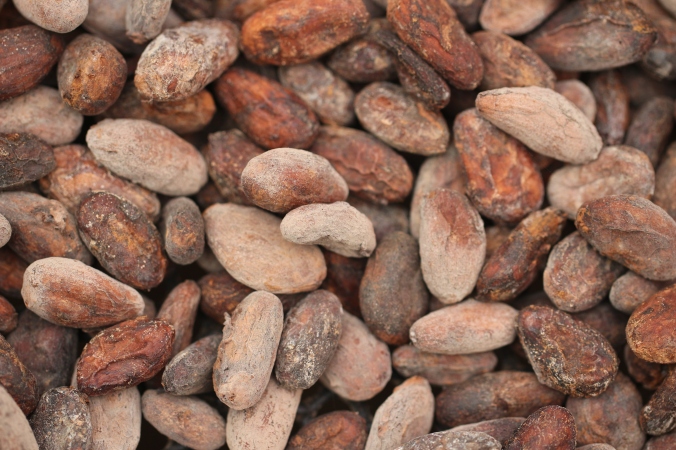 When the cacao is dry, it is ground and roasted with hand-made simple machines.  The ground and roasted pieces of cacao are blown through a tunnel, where the heavier insides of the cacao fall to the floor while the lighter shells blow out the front.  These lightly ground, shell less, roasted chunks of cacao are called cacao nibs.  The cacao nibs are ground into a finer paste, which is either pressed into cacao powder and cacao butter or exposed to high pressures and temperatures which liquify it.  Liquid chocolate is then hand tempered, so the crystals inside the chocolate form in a way that allows the finished chocolate bar to break cleanly.  The chocolate is poured into molds, and the finished bars are hand-wrapped.  El Quetzal makes 87%, 77%, and 67% pure chocolate bars.  Sergio said that the only thing added to the chocolate was organic sugar, and in some cases flavorings, such as macadamia nuts, hot pepper, and ginger.

After the tour, Sergio brought us a host of delicious looking chocolate products to try.  I don’t eat chocolate, out of a possibly irrational paranoia that it causes my migraines, but I was seriously tempted to try some.  We were offered all the different bars in many different flavors.  Once the pieces of bars had been eaten, unfortunately not by me, Sergio gave us each one of EL Quetzal’s famous brownies.  My mom ate mine with pleasure.