I recently attended the first ever Blue Ridge Young Birder Club field trip to Pocosin Cabin in Shenandoah National Park.  I had heard great things about Pocosin, and I was very excited to finally be getting up to Greene County to visit it.  The trip was well attended, with 11 young birder participants. 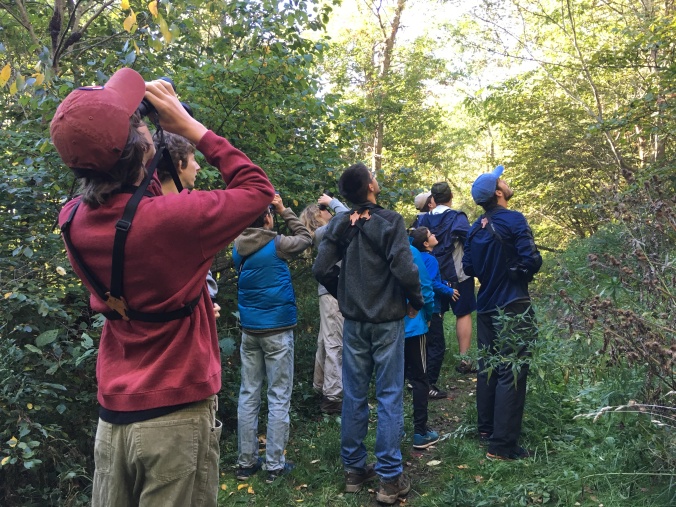 As we drove up the scenic Blue Ridge Parkway, numerous species of asters bloomed by the roadside, creating beautiful drifts of blue and white flowers.  When we got out of the car at the Pocosin Cabin Fire Road, the air felt cool and crisp, a refreshing change from the repressive heat of summer.  Around us, the black gums and tulip populars were already starting to change color to deep reds and yellows, while many of the other tree species remained green.  We encountered our first mixed species flock just after we passed the clearing containing Pocosin Cabin.  Birds flew everywhere I looked.  Swainson’s and wood thrushes were common, but try as we might, we could not find the more uncommon gray-cheeked thrush.  Blue-headed vireos flew and sang from seemingly every branch.  Later season warblers foraged the canopy around us, with Tennessee, blackpoll, and bay-breasted warblers being the most common species.  We also saw blackburnian and black-throated-green warblers, and a northern parula.  In a jewelweed-covered ditch next to the trail, a gorgeous brilliant blue, black, and white male black-throated blue warbler hopped and flitted.  Good bird activity continued down the trail, and just as we were talking about how great a Philadelphia vireo would be, Max called from up ahead that he had one.  We all rushed to him, but by the time we got there, the bird had disappeared. Panicked, we started thoroughly searching the abundant blue-headed vireos for the vanished Philadelphia.  Finally the bird was re-found, and everybody had fabulous views as it foraged in a shrub directly above our heads. 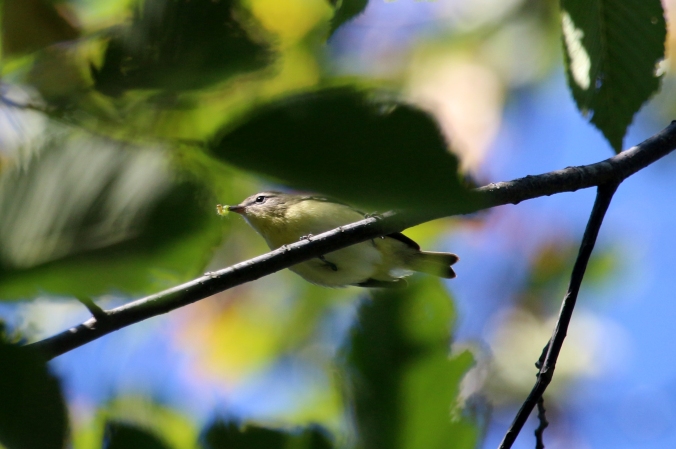 The Philadelphia Vireo eating a grub

We walked back up the fire road at a more leisurely pace, stopping periodically to look for salamanders under rocks and in the little creeks that crossed the path.  Aside from many common red-backed salamanders, Carson and Robert were able to turn up a southern-two lined salamander, and some monstrously sized northern dusky salamanders.

Last night we headed up to Beagle Gap in Shenandoah National Park to try to hear the Saw-whet Owl that has been wintering there.  When we got there it was still light, so we walked around a nearby meadow that was outside the boundaries of the park for a while, looking for any American Woodcocks or other birds.  We were alone in the silent meadow, enjoying the pink light falling on the mountains in the distance and  the golden glow of the meadow grasses.  Suddenly we heard a dry, harsh “peeent” call from the bushes beside the field.   As we walked toward the spot where the Woodcock had been calling, it suddenly erupted out of the grass by our feet. I hate how they do that!  I was able to get it in my binoculars and had a  decent look.  Soon there were “peeents” coming from all directions – there must have been more than five! The males would sit out in the field “peeenting” and then suddenly pop into flight. Then you could hear their rapid twitter as they flew overhead. 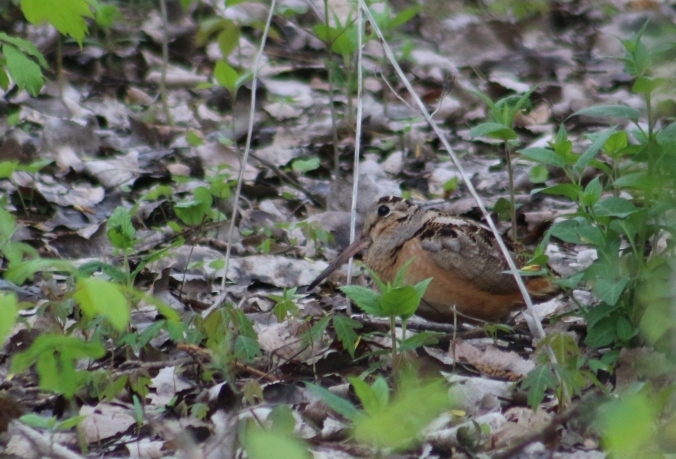 Woodcock photo I took in Ohio last Spring, not at Beagle Gap.

As the last “peeents” dwindled, an Eastern Screech Owl called from the distance. Its eerie trill fading to nothing as the meadow once again went silent.  After waiting a little bit, we played the Saw-whet call in hopes that it would respond.  After a couple of rounds of playing and then waiting for a few minutes we finally heard, somewhat distantly, but clearly, the wail-like call of the Northern Saw-Whet Owl.  It called just three times, but it felt almost as good as seeing it.  By then it was freezing cold so we left the mountain in a hurry.