Last week, my family traveled to New Hampshire to ski in the White Mountains.  The skiing was fantastic, but I’m here to talk about the birds.  We drove up from Charlottesville over the course of two days, stopping periodically to chase continuing rarities.  We saw our life bird tundra bean goose at East Reservoir Park in Philadelphia, and our lifer tufted duck at Captain’s Cove in Connecticut.  In addition to the tufted duck, Captain’s Cove proved to be a productive birding stop in general, with several hundred lesser scaup and a glaucus gull.  Two peregrine falcons briefly appeared over the frozen river and proceeded to dive at a lazily soaring red-tailed hawk, which fended them off by flipping over in midair.

Once we arrived at our destination, the town of North Conway, NH, we were struck by how few and far between the birds actually were.  On several occasions we walked for hours in the snow-covered spruce woods and could find little more than a few black-capped chickadees.  However, one day my brother called me outside early in the morning to point out a flock of four pine grosbeaks sitting in the top of a tree just outside our house, munching on berries.  They were puffed up against the cold, making them seem even larger and rounder then they normally do.  It was only the second time we’d ever seen the species, the first being in Glacier National Park several years ago.

Another day we decided to hike from Pinkham Notch onto the slopes of Mount Washington.  It was bitterly cold, so we covered as much of our skin as possible.  Even with gloves and a balaclava, my hands and face were soon cold.  However, the trail was steep, so my core quickly warmed up beneath my multiple coats.  The scenery was gorgeous.  More than a foot of snow blanketed the ground and weighed down the spruce bows.  We passed several small streams, all of them almost completely frozen, with the ice making intricate shapes along their banks.  One waterfall was particularly beautiful, with formations of gigantic icicles covering its rock face.  About two miles in we got to a flat spot with gaps in the canopy and were able to look up at the treeless caps of the mountains.  It was a landscape much more reminiscent to me of the Rocky Mountains, and utterly unlike anything I’ve seen before in the East.  We were in the bottom of a huge bowl, with white capped peaks rising up on three sides of us.  Directly in front of us, a massive wall of snow spanned the gap between two peaks.  Even though it was only two in the afternoon, the sun was low over the mountains, casting the snow in tints of gold and pink.

Once again, the birding was very quiet on Mount Washington, but we did encounter three boreal chickadees feeding in a grove of spruce.  We were first alerted to their presence by almost imperceptibly quiet “tsee” calls.  A patch of snow fluttered to the ground, and I raised my binoculars to focus on a plump, brownish bird with a large white ear patch.  The chickadees were much more muted and warmer in coloration than the black-capped chickadees we’d seen earlier, but their slow, deliberate movements among the snowy evergreens had a certain charm.  Other than the two chickadee species, we only saw two other species on Mount Washington, a downy woodpecker and a common raven.

The real highlight of the birding part of our trip came on our way home, when we stopped at Salisbury State Park in Massachusetts.  We were lured there by tantalizing eBird reports of winter finches, but we were under time pressure to drive the twelve hours back to Virginia before a snowstorm hit that we worried might make the roads impassable.  The entrance road to Salisbury led through a partly frozen brackish marsh, which was inhabited by hundreds of American black ducks.  We also spotted a few common goldeneye, mallards, and buffleheads.  Inside the park we drove to a snow-covered campground, which was notable for its extensive sameness.  Every campsite was alike, with a pine tree, a fire pit, and sometimes a picnic table.  It wasn’t long before we heard the calls of red crossbills and located a large flock foraging in the pines.  I spotted a smaller, streakier bird, and watched it until it turned to face me.  Sure enough, it had a bright red dot on its forehead, one of the most obvious features of a common redpoll, a finch I’d never seen before.  The redpoll briefly dropped down onto the ground, before moving off with a group of crossbills.  American tree sparrows foraged on the snowy ground, and large flocks of snow buntings wheeled about in the sky.

A local birder told us the location of two long-eared owls that were wintering in the park, and we followed her directions to them.  Although long-eared owls are present in Virginia, they’re very rare and hard to find, so we’d only seen one individual before those two.  After the owls, we walked out onto the beach and scanned the Atlantic Ocean for ducks.  White-winged scoters and common eiders were the two most abundant species, a striking contrast from Virginia where they’re among the rarest of the expected sea ducks.  In addition, we picked out a few surf scoters, long-tailed ducks, and common loons.  Three sanderlings foraged on the line of the breaking waves.

The time forced us to leave Salisbury to start our long drive home.  Normally I find being in the car for long trips tedious, but the week had been so filled with activity, sights, and birds that the time to sit and relax felt welcome.

Four homeschooling birder friends, my brother and I woke up at the crack of dawn on January third in Virginia Beach, having driven in late the day before.  Over our hotel breakfast we learned that up to eight inches of snow was forecasted to start around 7 PM, centering around the Cape Charles area, with only about two inches in Virginia Beach and Chincoteague.  Our plan had been to bird Virginia Beach that day and then head over the bridge into Northampton County the next day, but now the snow might make it impossible to get there.  We decided to skip VA Beach and bird Northampton County immediately instead, and spend the night in Chincoteague, so if we got stuck, at least we could walk into the National Wildlife Refuge there. 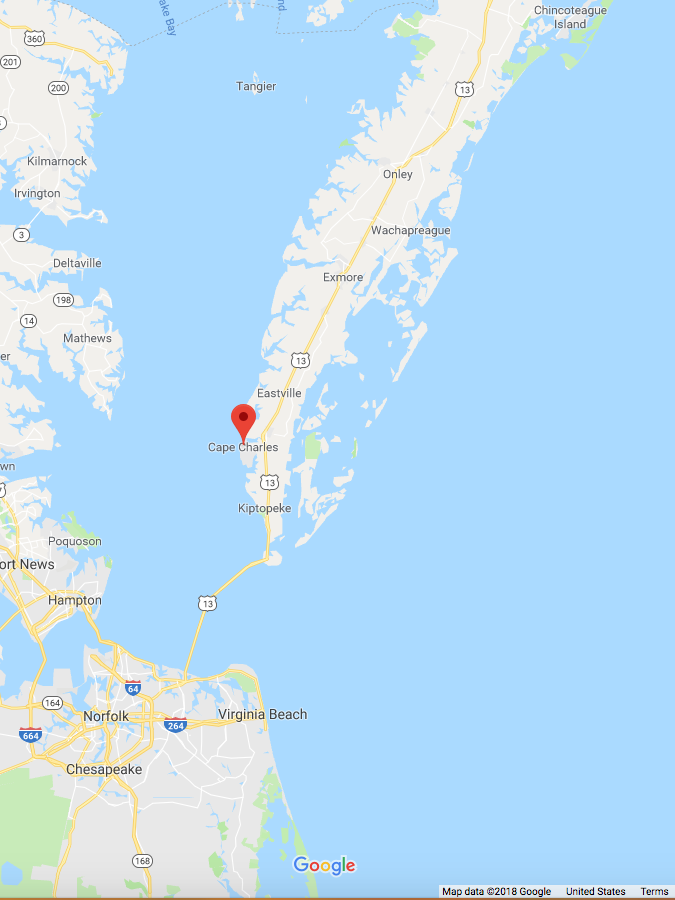 Map of coastal VA.   The marker is Cape Charles.

It was just getting light as we drove across the 23 mile long Chesapeake Bay Bridge Tunnel (CBBT).  We spotted large rafts of surf and black scoters from our car, as well as two year birds, great cormorant and peregrine falcon.  Soon after crossing the CBBT, we came to Magothy Bay Natural Area Preserve, our first stop.  The leaves of the wax myrtles and grasses were frozen, with tiny ice shards coating them, creating a silvery glitter wherever I looked.  Yellow-rumped warblers flitted about everywhere, no doubt trying desperately to eat enough myrtle berries to keep them alive in the frigid weather.  As we turned a sharp corner in the path, an American woodcock exploded out of the brush by our feet, its wings whistling.  The trail continued into an old pine woodland, where we heard brown-headed nuthatches, before opening into expansive salt marshes lining Jones Cove.  We worked our way along the edge of the water, listening for salt marsh or Nelson’s sparrows and scanning all the waterfowl we could find.  I got on a flying female common goldeneye, but I couldn’t get anyone else on it before it disappeared.  A flock of fifteen common mergansers flew over us, more than double the previous county high-count for the species.  As we continued our search for sparrows other than swamp or song, a cacophony of geese honking filled the air, and nearly five-hundred Canada geese descended from the sky.  Mixed in with the geese were a few duck flocks, with northern pintail and American black duck.  Despite continued searching, the only marsh birds we could find were a sedge wren and an orange-crowned warbler.

Our next location was Cheriton Landfill, the site of Virginia’s first state record of Lucy’s warbler, which we saw last year.  Fifteen hundred Canada geese swam in the little pond next to the landfill, but there wasn’t one single rare goose among them.  Mixed in with the geese, however, were twelve species of ducks, including redhead, green-winged teal, American wigeon, and northern shoveler.  We walked down the road behind the landfill, seeing song and savannah sparrows, but not much else.  As we walked back toward the car, over fifty black vultures circled above our heads, catching the morning thermals.

As we were driving to the Cape Charles harbor, we got an update on the weather.  They were now calling for over a foot of snow, and up to eight inches in Chincoteague.  We also learned that our hotel in Chincoteague did not have a generator.  With much regret we decided it would be better to abandon the coast at the end of the day, and spend the rest of our trip in Northern Virginia.

As we walked through the dunes to the harbor, two pale white sparrows flew up onto a sign.  We quickly saw they were “Ipswitch” savannah sparrows, a range restricted coastal subspecies that was new for most of us.  Forty American oystercatchers rested on a long rock jetty projecting in to Cape Charles harbor, and purple sandpipers, ruddy turnstones, and sanderling fed around their feet. 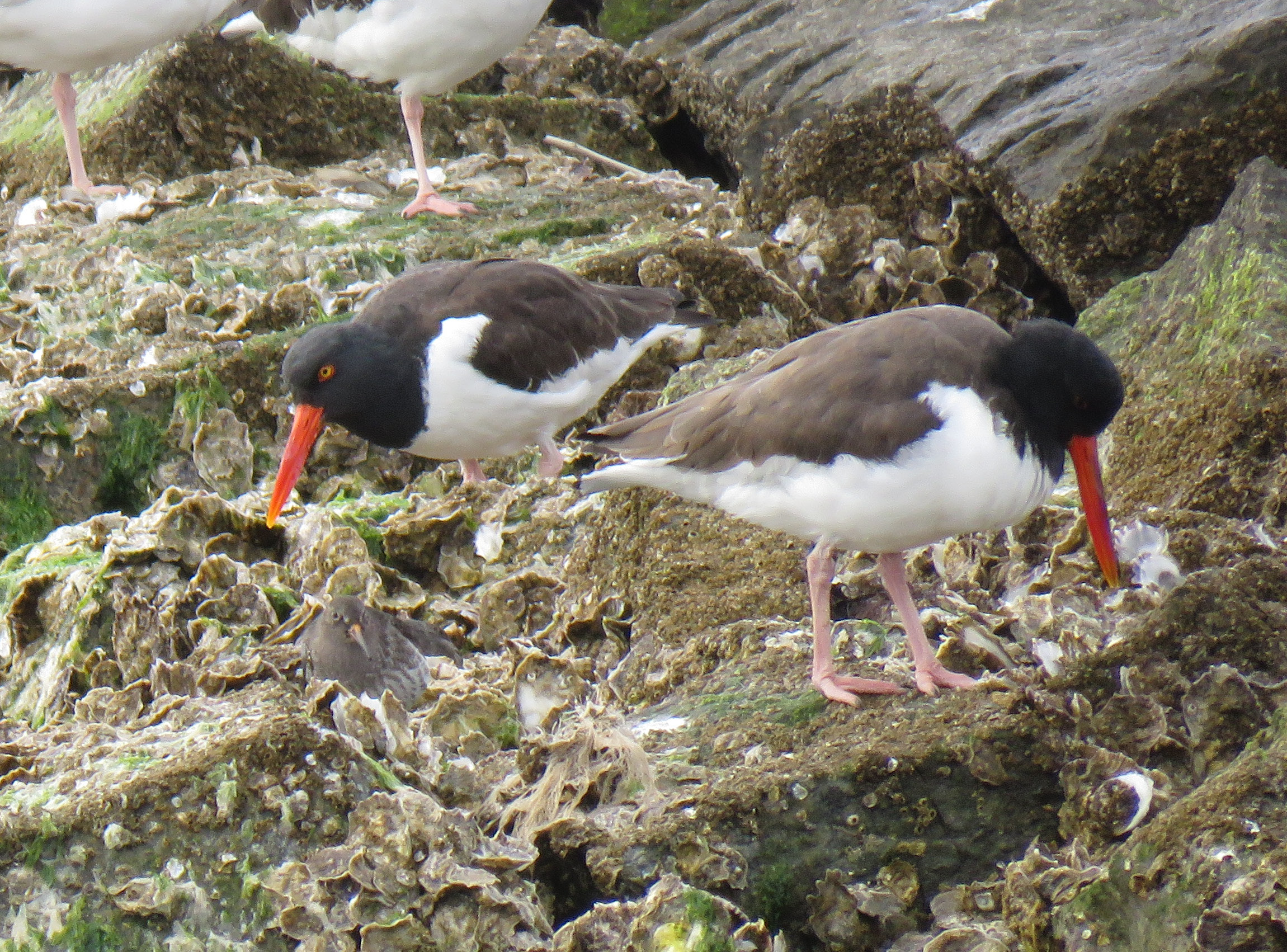 We watched bufflehead, surf scoters, greater scaup, and ruddy ducks fly around, and practiced getting flight shots of them. 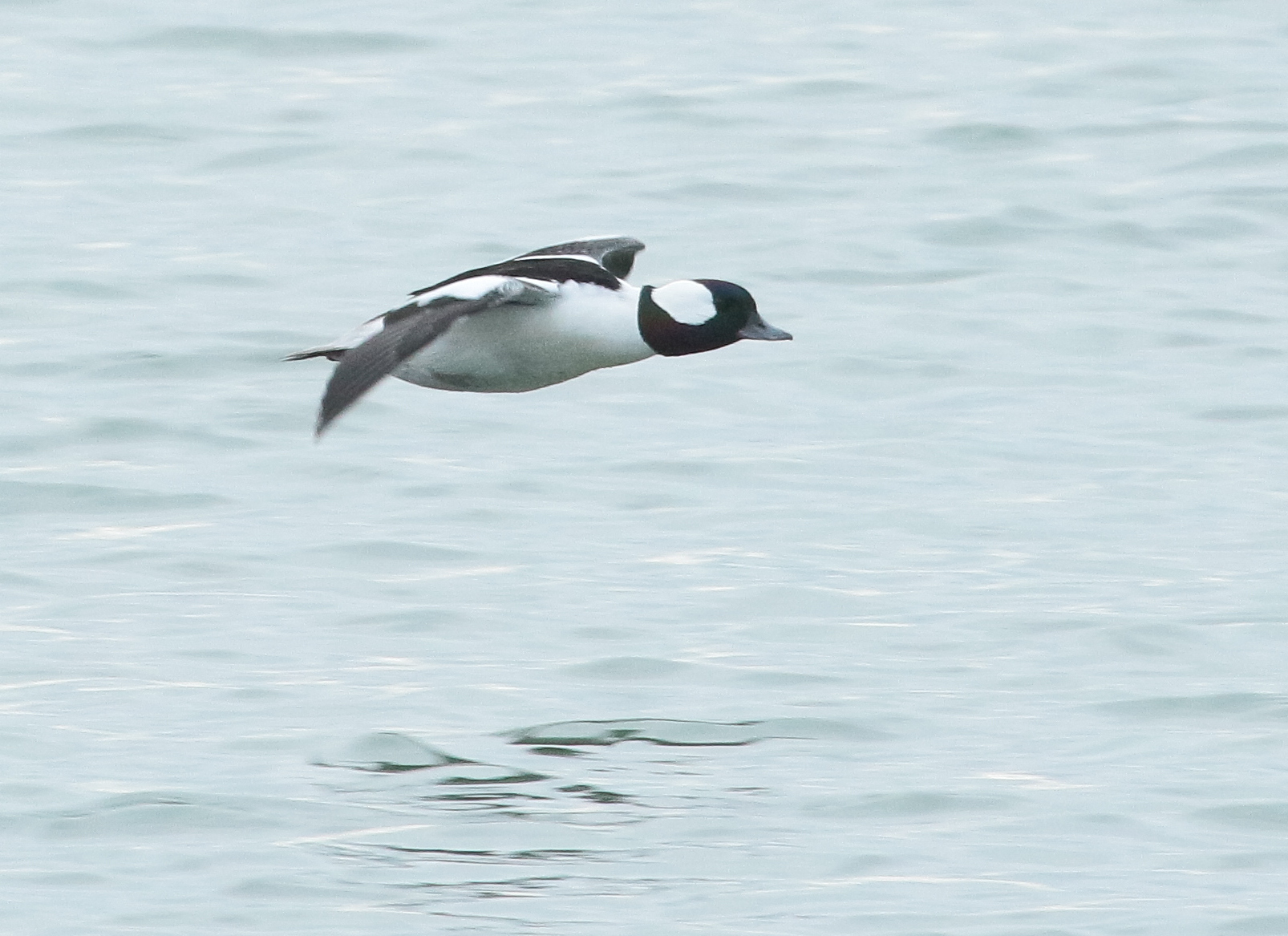 As we were leaving, two flocks totaling 13 common mergansers flew over us, leaving us to wonder why there were so many of them in Northampton that day when they are usually fairly rare.

Our final coastal location before we had to head inland was the Kiptopeke State Park Fishing Pier, where two snow buntings had been hanging out.  The fishing pier is a rather dreary place, a large artificial projection into the bay with an inch of dead yellow grass on top.  From it, you can see a chain of ancient naval vessels out on the water, stripped of any useful material and left to rot.  Finding the white snow buntings in a flock of savannah sparrows and yellow-rumped warblers was not hard, and we observed these cute birds for a long time. 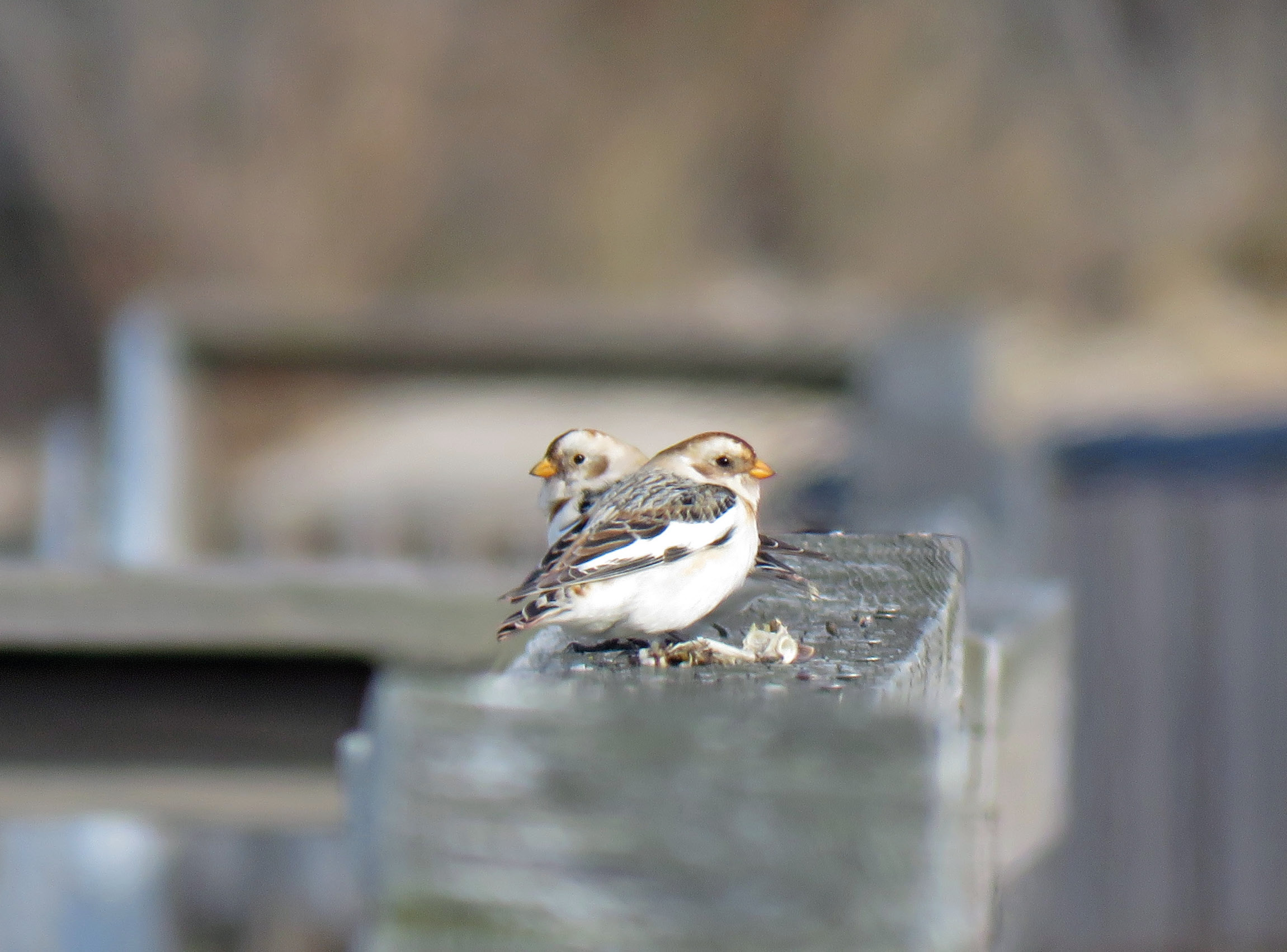 Snow buntings breed in the high arctic tundra, and according to wikipedia have the farthest north distribution of any passerine.  In the winter they migrate down into boreal Canada and New England, and a few overshoot and end up in places like Virginia.

We were disappointed that we wouldn’t be going to Chincoteague, but our coastal birding had still been productive, and with any luck birding Northern Virginia would be too.

Join 93 other followers
Follow Birds and Buds on WordPress.com