All we could see from the Elk Garden parking lot at White Top Mountain was a thick blanket of fog.  It covered the meadows and mountains to our left, and obscured the distant Yellow Birches of the forest on our right.  It wasn’t exactly raining, but we could feel the heavy wetness in the cool air.  It was around 40 degrees Fahrenheit, an average temperature for this elevation even on a summer morning.  White top Mountain’s peak is the second highest peak in Virginia at 5,525 feet, but we were only at a bit over 4,000 feet.  As our group assembled in the parking lot, our guide, Kevin Hamed, Professor of Biology, at Virginia Highlands Community College, told us interesting things about salamanders.  He said that in addition to being able to regrow lost tails, many salamanders can regrow legs and even large parts of their heart.  He also told us that the total biomass of salamanders in the Southern Appalachians is greater than the biomass of all the mammals and birds in the area combined.  That’s a lot of salamanders! As we walked down a small gravel road on our way to the salamander spot, I noticed how different the flora was from Shenandoah National Park back home.  Instead of White Trillium (Trillium grandiflorum), the common trillium carpeting this forest was Red Trillium (Trillium erectum).

After 40 minutes of searching around a rocky moss covered slope, our group found 7 species of salamanders in an area less then one acre. We saw the regional endemic Weller’s Salamander, which lives only in the Mount Rogers area of Virginia and North Carolina and far eastern Tennessee. 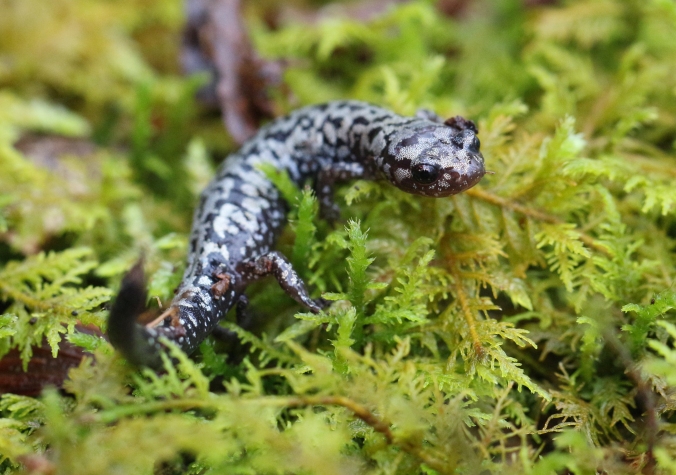 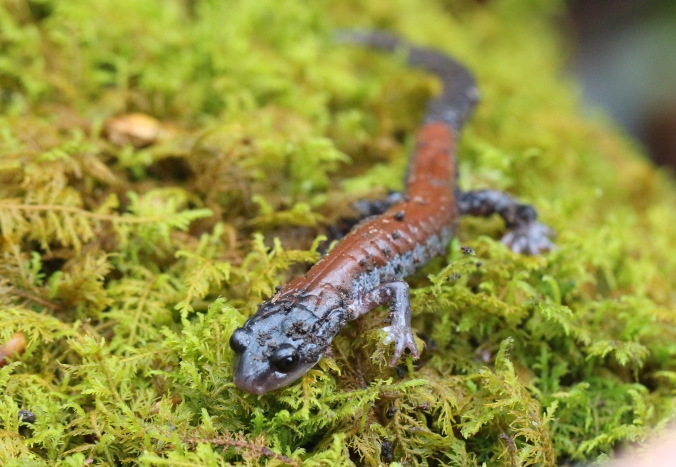 After finishing at that site, we headed to a fast flowing mountain stream to look for aquatic species.  By turning over rocks in the stream we found more Grey-cheeked and Northern Dusky Salamanders as well as Blackbelly Salamander (Desmognathus quadramaculatus) and Seal Salamander (Desmognathus monticola), which were both new species for the day. Interestingly, the previously abundant Weller’s and Yonahlossee Salamanders were completely absent.  Upon returning to the Konnarock Community Center, the home base for the Mount Rogers Naturalist Rally, we heard about a Northern Red Salamander under a wooden board.  It was our 11th species of Salamander for the day.

Join 94 other subscribers
Follow Birds and Buds on WordPress.com