As we drove up the long, winding road to the Rockfish Gap hawk watch, the barely risen sun revealed a striking scene in the valley below us.  We looked down on a solid layer of dark, heavy clouds.  The gap of clear air that we were driving through quickly gave way to more clouds above us, obscuring the taller mountain peaks.

A light drizzle filled the cool air as we reached the parking lot of the Inn at Afton, where the hawk watch is located, and where our young birders club planned to meet for the day’s field trip.   Our plan today was to bird the Rockfish Valley Trail, a local hotspot in Nelson County, and than head back up into the mountains and bird the road known as State Route 610, or the Swannanoa road.  I was even more excited than usual as today’s trip would be the first time I served as trip leader.

When I got out of the car, I heard the flight call of several warblers. Dylan, an eight year old who recently started birding with us, quickly joined my brother and me.  He pointed to a dilapidated, old road sign above our heads, and said he had seen birds in it.  The sign had once read “The Inn at Afton,” but the front had long since fallen off, revealing the sign’s bright interior lights, shining like a beacon to migrating birds.  When I raised my binoculars, I couldn’t believe what I was seeing.  More than 20 wood warblers sat on and near the sign’s lights.  Occasionally, another would drop out of the sky and join them, explaining the chips I had heard earlier.  Just than, the rest of the trip’s participants pulled up and joined us, making seven young birders total.

Nashville Warbler (Leiothlypis ruficapilla), with Northern Parula (Setophaga americana) inside the sign at the Inn at Afton.  Photo by Tucker Beamer.

We were excited by what this abundance could mean for the rest of our day.  If so many warblers were in such a small area, in such strange conditions, maybe today could be a fallout.  Fallout is a condition where due to sudden, severe weather, large numbers of birds migrating at night are forced down in a small area.  Fallouts are highly sought-after events for birders, as they can result in rare species and unusual numbers of birds.

As the sun rose, the light revealed a more gruesome scene.  Little bodies of black-throated blue warblers and common yellowthroats littered the parking lot, a sad reminder of the many dangers birds face on migration.  These birds were probably attracted to the bright light of the sign and the Inn, and met their death by flying headfirst into these obstructions.

My brother and I had scouted the Rockfish Valley Trail the morning before the trip.  There had been sparrows everywhere, roving about the abandoned fields and brushy hedgerows in large flocks.  We had found five Lincoln’s sparrows, the first two white-crowned sparrows observed in Nelson that year, and tons of song and swamp sparrows.  As we scanned the flock, a strange chip suddenly came from the vegetation by our feet.  Looking down, I saw a blob of rufous feathers fly into another bush — a marsh wren!  Excitedly, we waited for it to make another appearance.  We soon found another one, and enjoyed fabulous views of both. 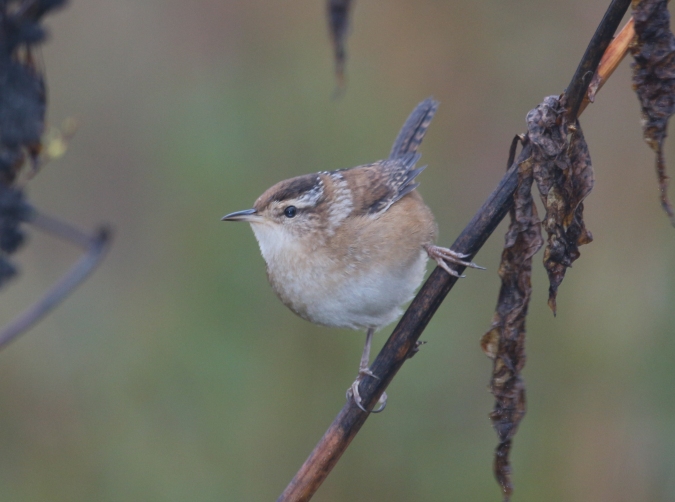 It was the highest number of marsh wrens ever observed in Nelson County.  I hoped one would stick around for the next day’s field trip.

The thick cloud-cover had not thinned out much as we pulled into the parking lot at the Rockfish Valley Trail, a good sign for songbird activity.  We walked under Route 151 towards the Glenthorne Loop trail, which is usually more productive for sparrows.  When we arrived at the field I had seen the marsh wrens at the day before, I was disappointed to see that most of the sparrows were gone, and the marsh wrens were no longer present.  Even so, we quickly found some swamp sparrows, and two gorgeous white-crowned sparrows.  I walked ahead of the main group, and was relieved to have a Lincoln’s sparrow, one of my favorite sparrows,  hop out on a branch in front of me.   Its gray face, buffy malar and crisp black streaking is so beautiful.  I called to the rest of the group, and was very frustrated when it flew off before any of them could get on it.  Luckily, we soon found a few more in with a sparrow flock on the Spruce Creek side, and we all had fantastic views.

As we were wrapping up at the Rockfish Valley Trail, I spotted a small, dark falcon flying quickly overhead.  It turned out to be a merlin, which was the first one seen in Nelson County that year.  The merlin circled once, giving us a fabulous view, before it shot off down the ridge.

As we drove back toward Swannanoa road and the hawk watch, we felt like we were racing against time.  The clouds were finally beginning to give way, and blue holes were appearing everywhere.  It was also slowly getting warmer.  When we got out of the car at the end of the Swannanoa road, it seemed our fears had been confirmed.  The beautiful Fall foliage was silent.  A turkey vulture soared lazily overhead.

However, a closer inspection revealed our fears that the birds would no longer be active were unfounded.  Warblers slowly foraged every tree, and many were surprisingly close to the road.  We quickly found blackpoll, black-throated green, Tennessee, and Cape-may warblers, as well as unseasonably large numbers of black-throated blue warblers. 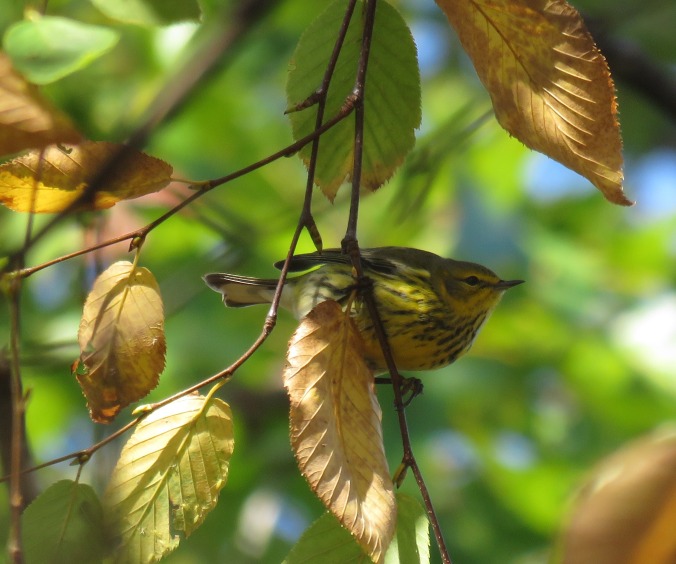 As we walked farther down the road, we saw more and more birds.  Late wood thrushes feasted alongside more seasonally common Swainson’s thrushes in thick tangles of summer grape vines, laden with purple fruit.  We found a late black-and-white warbler and an American redstart.  Scarlet tanagers swooped over the road, and black-throated blue warblers chipped over our heads.  We eventually also found magnolia, palm, pine, and yellow-rumped warblers.

Our final destination for the day was a golf course in the Old Trail neighborhood of Crozet, where someone had seen a clay-colored sparrow the day before.  We had directions to the clump of pokeweed he had been in, and we soon found it.  As we arrived, Baxter saw the bird hop down into the dense brush.  We waited several anxious minutes for it to return, but we needn’t have worried.  It soon returned and sat preening itself on a poke stem while we watched.  The clay-colored sparrow was an Albemarle lifer for everybody, and a lifer for Max and Drew.

When I totaled up our day list that evening, I found we had seen 72 species.  We had experienced a late Fall migration fallout, and we enjoyed ourselves very much.  What an incredible day of local birding!

2 thoughts on “Fallout at Rockfish Gap”