I woke at 6:00 AM on my first day in Mindo, Ecuador to the sound of hundreds of unfamiliar birds chattering and singing.  My brother Theo and I got out of bed, and together we walked out onto our deck, peering through the half light at the backlit forms of singing birds.  The large elegant shape of a motmot caught our eyes sitting in a fruit laden tree in front of us, but it was still too dark to make out enough color to identify it.  As the sky lightened, we began to notice tanagers foraging in the flowers of the same tree.  We identified flame-rumped, blue necked, bay-headed, and golden tanagers, which were all lifers.  I noticed a tiny, richly patterned hummingbird, reminiscent of a bumblebee, buzzing on some purple flowers and I called Theo’s attention to it.  We later learned that it was a purple-throated woodstar. Other common hummingbirds that we saw that first day included rufous-tailed hummingbirds, western emeralds, and the green crowned brilliant.

After breakfast, we decided to bird the popular waterfall trail, a road leading up into the mountains above the town of Mindo.  We had heard that white-capped dippers and torrent ducks could be seen in the white-water and waterfalls accessed along the road.  Fifty foot tall dirt banks loomed over us as we walked up the road, their sides adorned with lush, dripping vegetation.  Mosses carpeted everything, from the huge trees and tree ferns to the occasional well lit patch of forest floor.  The forest was so dense it was hard to see beyond a few feet from the road.  As the road climbed onto ridges, we were able to look down at the canopy on either side of us. Here we encountered our first large tropical foraging flock.  We came around a bend, and suddenly birds were everywhere — tanagers of all descriptions, wood-creepers, spinetails, flycatchers, and warblers.  Some warblers familiar from home like blackburnian and Canada warblers, and tropical parulas, were joined by new species like slate-throated red-starts and three-striped warblers.

After several more exciting flocks, we turned off the road onto a small dirt trail that descended swiftly down into a heavily wooded valley.  The trail was slippery and muddy, cut into a steep cliff with metal railings on one side.  A small flock exploded in the trees over our heads.  The brilliant, golden orange faces of flame-faced tanagers stood out in the dark leaves.  Soon we saw our first white-winged tanagers and blue-winged mountain-tanagers of the trip.  As we descended into the valley, the air grew noticeably warmer and more humid.  An agouti, a large, rabbit-like rodent, ran across the path in front of us as we entered a clearing.

We crossed a rickety metal bridge with rotting bamboo hand-rails at the first river crossing.  The water churned beneath us, rushing over rocks in white clouds and crashing back into the river-bed.  Despite the rough water, we could not see a dipper. We came to a place where cement had been lain on the banks of the river, changing and channeling the water into a deeper slower spot.  An incredibly steep-looking water slide made of crumbling cement was positioned on one of the nearly vertical banks of the river.  We continued until the trail ended just past another river crossing, and turned around.  As we began climbing the slope away from the river, I looked back and saw a white blob on one of the rocks in the turbulent stream below. I raised my binoculars, and saw it was a white dipper with a black mask. We had found a white-capped dipper after all.

During our visit to Mindo, we had many opportunities to bird the grounds of Las Terrazas de Dana Lodge, where we were staying.  We found that in the early mornings and late afternoons the birding was often good in the trees around the edges of the cabins, with larger and more frequent tanager flocks there.  All the common tanagers, thick-billed euphonias, yellow-tailed orioles, green-crowned brilliants, and red-headed barbets also fed at the lodge’s banana and hummingbird feeders in the late afternoon.  When we tasted the Ecuadorian bananas, it became apparent why the birds appreciated them so much.  They were the sweetest, creamiest bananas I’ve ever had, and they were never hard and green or brown and rotting.  We asked the lodge for some to put on the platform banana feeder directly behind our cabin, and we soon had all the brilliantly colored tanagers and barbets visible from our private deck. 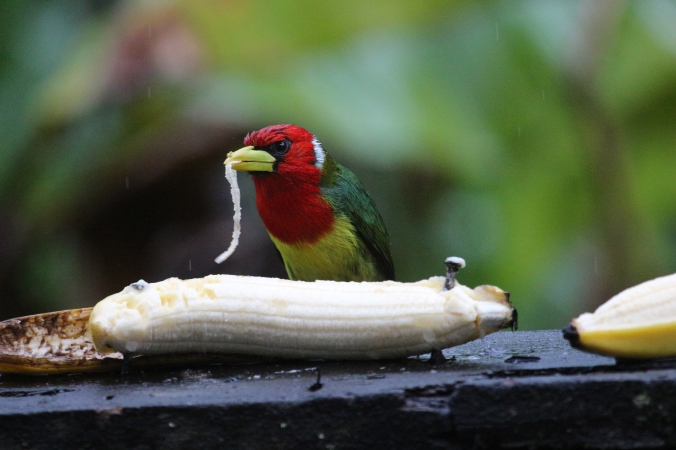 On several occasions we walked out of the entrance of the lodge and went right on the road, away from the town of Mindo, and the turnoff for the waterfall trail.  We twice encountered a scarlet-backed woodpecker on this road, as well as an olivaceous piculet, which is an exciting little tropical mini-woodpecker of sorts. Southern lapwings flew about in the field across the road from the lodge, and roadside hawks were also often present.  One day we made the trip down this road while it was raining, and we lucked upon a torrent tyrannulet hunting over a little trickle.  We also saw a striated heron, variable and yellow-bellied seedeaters, and a cooperative pale-legged horneo. 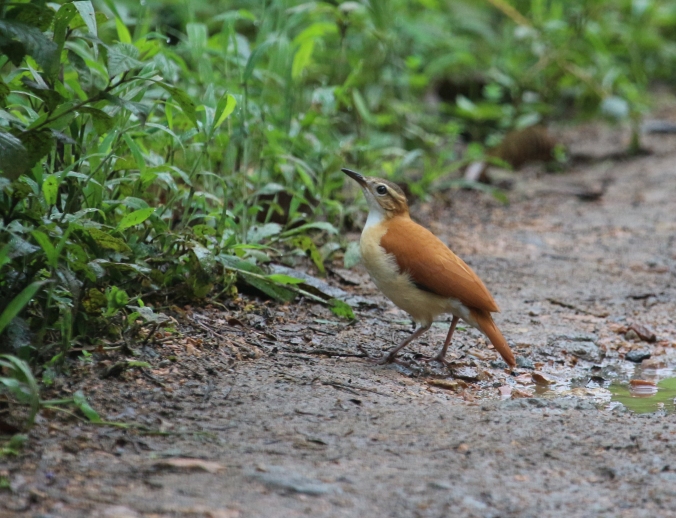 Another location in Mindo that we birded multiple times was the Yellow House Trails, a 494 acre reserve of secondary and primary cloud forest.  From the Yellow House Lodge at the beginning of the trail, we climbed up over cow pastures and scattered guava trees towards the top of the mountain, where the forest started.  From the exposed vantage point the slope gave us, we could look out on raptors flying in the valley below.  We saw roadside hawks, hook-billed kites, and even a rare snail kite.  Once we reached the rainforest, smaller trails numbered one through five branched off the main trail.  These trails wound right through the heart of the cloud forest, giving a close up view of it.  Huge trees towered over a dense understory of bushes and vines, which were carpeted in mosses and epiphytes.  The forest was so dense that it was often hard to see far enough to spot birds, but despite this challenge, the trails were still very productive.  Pale-mandibilled aracaris and yellow-throated toucans squawked and flew about in the canopy.  On the way back towards Mindo via the main trail, we saw a crested guan slowly walking about in the top of a tree.

In the first mixed flock we encountered on the Yellow House trails, we spotted a cerulean warbler, a beautiful and endangered songbird that breeds in the Appalachian Mountains of the eastern United States.  Seeing one so far from where I’ve experienced them in the summer in Virginia highlighted for me the importance of such far flung places as habitat, even for a songbird as representative of the southern Appalachians as the cerulean.  It also helped to complete my picture of the species, adding a memory of it foraging in the cloud forest canopy with species like fawn-breasted, golden and blue necked tanagers to visions of cool early spring mornings when the buds are just opening and the trees are full of bird song back home.

Mindo is located in the Choco-Darien moist forest ecoregion, a biodiversity and endemism hotspot that ranges from southern Panama through north-western Ecuador.  Almost 70 species of birds that live no where else in the world can be found in Mindo and the surrounding mountains.  When I first became interested in going to South America a couple of years ago, I wasn’t sure whether I would rather travel to Peru or Ecuador.  In the end, Mindo’s incredible birding and ease of access – its only 2 hours from Quito international airport by car – won the case for us.  After more than a week in the Mindo area, I definitely felt that we made a good choice.  If you have any questions about Mindo or the region, or information to share, feel free to email me or leave a comment.