Last year at the Biggest Week in American Birding in Northwest Ohio, I remember seeing warblers everywhere I looked from the Magee Marsh Wildlife Area boardwalk.  By the end of the festival, we had seen 31 species of warblers, including rarities such as Kirtland’s and Mourning Warblers.   Other migrants were also abundant: Whippoorwill, Black-billed Cuckoo, Curlew Sandpiper, Wilson’s Phalarope, and White-rumped Sandpiper to name a few.  Magee Marsh and other wildlife areas that line Lake Erie in that area serve as migrant traps, where many birds stop to rest and refuel before crossing the lake.  I was very excited to be going back.

As we drove to the festival, though, I started worrying.  Migration was late this year and we had to get back to Virginia to attend the Mount Rogers Naturalist Rally.  These plans meant that we couldn’t stay till the end of the week when the rarer warblers and flycatchers would be expected even under more typical migration timing.

Our first morning, we started early at Magee Marsh.  Unfortunately, compared to last year, the boardwalk was dead.  It seemed like there were more warblers back in Virginia.  We found 41 species of birds that morning and I was able to photograph this posing Black-throated Green Warbler.

Feeling a little depressed at having birded the self proclaimed “Warbler Capital of the World” for an hour yet seeing only 6 warbler species, we headed to the nearby Metzger Marsh Wildlife Area.  As we pulled into the small, empty parking lot, we saw 4 Sandhill Cranes fly overhead, their strange rattling calls filling the sky.  We found a muddy trail on a narrow stretch of ground just barely elevated above the water on either side of it, leading off into the wide open marshlands.  As we walked onto this little dike, we heard several Sora.  We saw American Coots and Common Gallinules in the open sections of water.  Suddenly, something sprang into flight from some grass next to my brother’s feet.  As it flew, I registered the small size, little trailing feet, and tannish coloration of a Least Bittern.  It landed at the top of some marsh grass, and we had a few seconds to look at it before it slid down the stalk and disappeared.  This Least Bittern was only the third one I had ever seen.  Marsh Wrens sang along the trail, but sadly we were never able to see one.  Not bad marsh birding at all: Sora, Common Gallinule, Marsh Wren, Sandhill Cranes, and Least Bittern!

We returned to the car and checked the Biggest Week twitter feed.  Someone had reported two Upland Sandpipers, a lifer for me, at Grimm Prairie at the Ottawa National Wildlife Refuge.  When we got there, we saw a line of birders with scopes standing in the parking lot staring into the empty field.  The birds hadn’t been seen for awhile and were probably behind a clump of grass.  We got our scope and scanned the field, but the heat haze was so thick that we couldn’t see much in the distance.  Deciding that we would bird the rest of Ottawa and keep our eyes on twitter in case the birds were re-found, we packed up and left.

Hundreds of swallows of 5 different species surrounded us as we started down the foot trail around the impoundments at Ottawa.  I saw a Bank Swallow among the much more prevalent Tree, Northern Rough Winged, and Barn Swallows and Purple Martins, but my brother, who had never seen one, missed it.  I was therefore distracted the rest of the afternoon by the necessity of scanning every swallow that came by to try to find another Bank for him.   We didn’t see another one.  Nevertheless, I did enjoy seeing Black Tern, Least Flycatcher and a Black-crowned Night Heron there.

Back at Grimm Prairie, we saw the Upland Sandpipers (if you can call the horrible, distant, distorted scope views we had ‘seeing’) although certainly not as well as I would have liked through the heat haze.

The next morning, we started by stopping at the intersection of Angola and Raab Roads, which had a Curlew Sandpiper last year.  This year we had 5 swallow species including Bank and Cliff on the wire by the road.  My brother was very happy about finally finding a Bank.

We spent the rest of the morning birding the metro parks of Toledo.  At Oak Openings Metropark, we got Lark Sparrow, Red-headed Woodpecker, Least Flycatcher and Nashville Warbler.  At Pearson Metropark we saw almost nothing.  Later in the afternoon, we headed back to Magee to see if anything new had shown up.  There was more Warbler activity, with Blackburnian Warbler, Northern Waterthrush, Orange Crowned Warbler, and Cape May Warbler, but it still didn’t compare to last year. 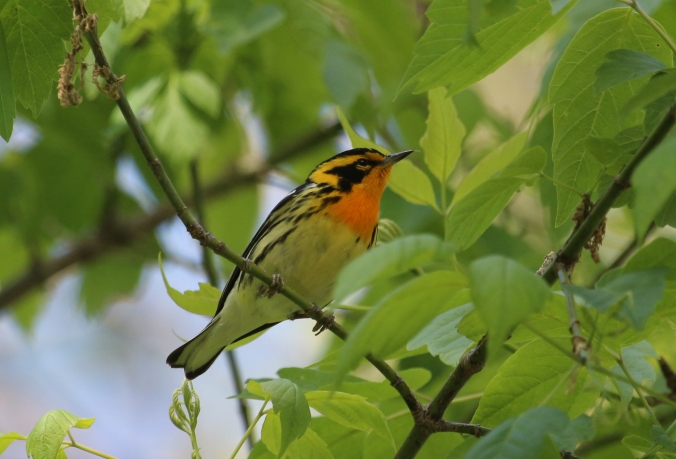 The next day (Wednesday), things were finally really starting to get better as far as migrant passerines were concerned.  We had 60 species of birds on the Magee Marsh boardwalk, with 19 species of warblers.  Prothonotary, Blue-winged and Hooded were some of the better ones we saw.

That afternoon, we went to Maumee Bay State Park, where birders had spotted a Clay-colored Sparrow.  As we waited for it to stick its head out of the grass, we watched Purple Martins gracefully wheeling overhead and landing on the artificial gourds that had been set out for them.  Just as we were getting ready to bird the Maumee boardwalk and come back for the Sparrow later, it flew out of the grass, circled its crowd of gathered admirers and landed in a leafless tree right in front of us.  It was the second time I have seen a Clay-colored Sparrow, but this time provided, by far, the better looks and photos.

We spent the  rest of the day slowly birding the Maumee boardwalk, enjoying the peaceful swamp forests.  Veerys seemed to hop on every other fallen log.  We  saw the well-known red morph Eastern Screech Owl that reliably roosts in a box next to the trail.  Ovenbirds, Nashville Warblers, and Yellow Warblers sang in the willows and cottonwoods.

We had to leave for Virginia by 10am Thursday morning, so we didn’t have much time to bird.  We decided to bird Magee Marsh for the whole time in hopes that migration would have picked up.  It was the best day so far, and at times it was almost as good as it had been last year.  One of the best things about Magee Marsh, second to the bird themselves, is that you can see warblers only feet from you at the edge of the boardwalk.  And even when they are not posing perfectly, they are never very high in the canopy like they are back home.  The birds’ proximity and diversity make this an exceptionally good location for warbler photography.  Here are some favorite photos that I took that last morning in Ohio: 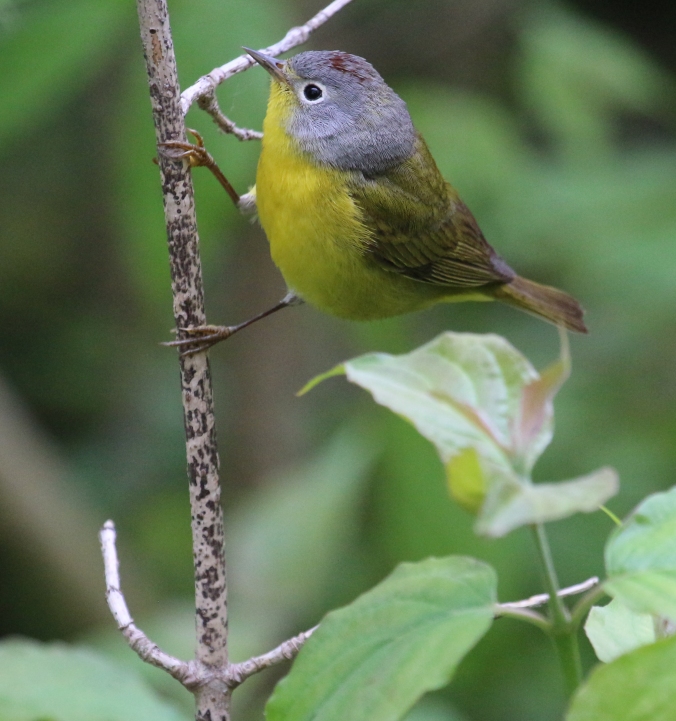 We also got great looks at Bay-breasted Warbler that day, and so many other warblers.  By the end of the trip, our trip list was 130 species, and we had seen 22 species of warblers.  Not as good as last year, but we had a lot of fun, and saw plenty of birds.

Last night we headed up to Beagle Gap in Shenandoah National Park to try to hear the Saw-whet Owl that has been wintering there.  When we got there it was still light, so we walked around a nearby meadow that was outside the boundaries of the park for a while, looking for any American Woodcocks or other birds.  We were alone in the silent meadow, enjoying the pink light falling on the mountains in the distance and  the golden glow of the meadow grasses.  Suddenly we heard a dry, harsh “peeent” call from the bushes beside the field.   As we walked toward the spot where the Woodcock had been calling, it suddenly erupted out of the grass by our feet. I hate how they do that!  I was able to get it in my binoculars and had a  decent look.  Soon there were “peeents” coming from all directions – there must have been more than five! The males would sit out in the field “peeenting” and then suddenly pop into flight. Then you could hear their rapid twitter as they flew overhead.

Woodcock photo I took in Ohio last Spring, not at Beagle Gap.

As the last “peeents” dwindled, an Eastern Screech Owl called from the distance. Its eerie trill fading to nothing as the meadow once again went silent.  After waiting a little bit, we played the Saw-whet call in hopes that it would respond.  After a couple of rounds of playing and then waiting for a few minutes we finally heard, somewhat distantly, but clearly, the wail-like call of the Northern Saw-Whet Owl.  It called just three times, but it felt almost as good as seeing it.  By then it was freezing cold so we left the mountain in a hurry.