One of the great things about birding Mindo, aside from the fact that the town itself has fabulous birds, is that it serves as a convenient central location for trips farther afield.  One such location that we visited was the Bellavista Cloud Forest Reserve, located at 7200 feet above sea level, where we saw many high elevation specialties not present in Mindo itself.

As the sky began to lighten, I looked outside the van’s windows at a landscape of endless tall, forest-covered mountains bathed in clouds.  We had been driving in the pre-dawn darkness up a bumpy, winding, gravel road into the mountains for the last half hour.  A large bird with an unusual upright posture hopped out into the road in front of our van, turning its chunky bill to look straight at us.  It had a chestnut colored head and its white breast was finely streaked with black.  A chestnut-crowned antpitta, we realized, one of the most easily seen of the notoriously shy and difficult to see antpitta family, but still a very nice bird.

The Bellavista Lodge had put out moth traps the night before, and as the sun rose, birds came to feast on the torpid moths.  It started slowly in the gray light, with strong-billed and montane woodcreepers stalking up the trees, and russet-crowned warblers foraging in the bushes near the parking lot.  Soon, however, we were spotting new birds at such a rate that it was hard to keep up.  White-winged brushfinches, masked flowerpiercers, brown-capped vireos, white-tailed tyrannulets, golden-crowned flycatchers, smoke-colored pewees, plain-tailed wrens, and gray-breasted wood-wrens flew about, eating moths in a frenzied blur of activity.  Pairs of small, cute, reddish cinnamon flycatchers hunted from exposed twigs.

Suddenly, a brilliant-blue bird flew down out of the canopy onto a banana feeder and materialized into a turquoise jay, one of the most stunning birds I have ever seen.  The jay was soon joined by a group of toucan barbets, ridiculously colorful birds with black crowns, white ear tufts, slate gray throats, red breasts, yellow bellies, and olive-green wings.  I spotted a male masked trogon sitting on a light post on the lodge, but I was distracted from photographing it by a powerful woodpecker flying onto a tree trunk.  As the morning burst of activity finally began to die down with the sun fully up, we noticed an Azara’s spinetail hoping slowly through a tangle of dense brush near the ground, and a streaked tufted-cheek hopping on a stump.

At Bellavista Lodge’s hummingbird feeders, we watched the tiny but energetic booted racket-tail vie for its position on the feeder with other much larger hummingbird species such as buff-tailed coronet, collared inca, and fawn-breasted and empress brilliants.

A booted racket-tail watches other hummers drink at the feeder.

We walked back to our van for a breakfast of fruit, muffins and hard-boiled eggs before continuing our search.

We walked up the long, winding entrance road that we had driven in on earlier that morning, looking and listening for birds.  A loud, carrying whistle came repeatedly from the dense brush near a small, rocky cascade of water off to our right.  We tried for some time to locate it, but eventually we had to give up, and be satisfied with our heard-only ocellated tapaculo.  We picked through flocks, finding endemics such as Choco brushfinch, and dusky chlorospingus, along with blackburnian, black-and-white, and russet-crowned warblers.  We began to hear a repeated, faint screeching noise rising out of the valley below us, but I paid little attention to it until a large chunky bird with a humungous bill flew into a tree across the road from us.  The plate-billed mountain-toucan’s face was very striking, with a large blue, red, and yellow bill, and yellow and blue facial skin above its eye.  Plate-billed mountain toucans live only in the mountains of north-west Ecuador and the very south-western province of Columbia.  They are listed as near-threatened, their primary conservation concerns being habitat loss from deforestation, and illegal capture for the pet trade.

Soon after the toucan flew off, we turned off the main road onto a small dirt trail that followed the top of a ridge to an overlook.  The loud trill of a Spillmann’s tapaculo sounded from a clump of roots.  We emerged from the trees, into the diffused light of an overcast day.  Mountains stretched into the distance as far as we could see, their tops shrouded in mist. 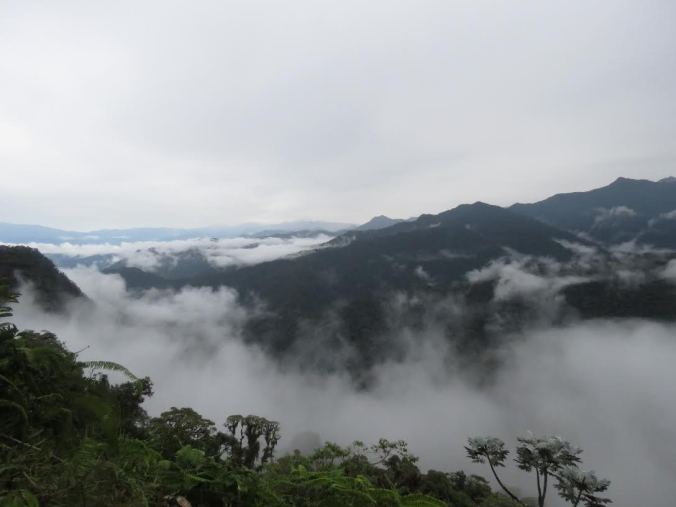 Reluctantly, we left the beautiful scenery and got back into the van for the bumpy ride to our next stop.

At the Quinde Luna Cloudforest Reserve, we sat on a patio looking out toward five or six hummingbird feeders.  More than fifty hummingbirds of thirteen different species swarmed around us at barely comprehensible speeds, living their lives at an insane pace.  In the span of seconds, two hummingbirds would go from drinking peaceably next to each other on a feeder to intense, high speed, aerial combat, finally falling, shrieking and chattering to the ground.  I couldn’t help wondering how they avoided collisions at such speeds, and despite their obvious ability to navigate, I felt an irrational impulse to cover my eyes whenever they came whirring by.  The hummingbirds’ array of colors and shapes mesmerized and entertained me long past the point where we had identified and photographed all the species present.  Seemingly every part of the hummingbirds was colorful and unique, from their bills and tails to their body plumage and fantastically iridescent gorgets.  The booted racket-tail has two big clumps of white feathers over its legs, which look like little furry white boots.  The violet-tailed sylph has a long, dazzling iridescent blue tail and a stunning greenish crown stripe.  Velvet-purple coronets are a rich, flashy purple color, with black highlights. 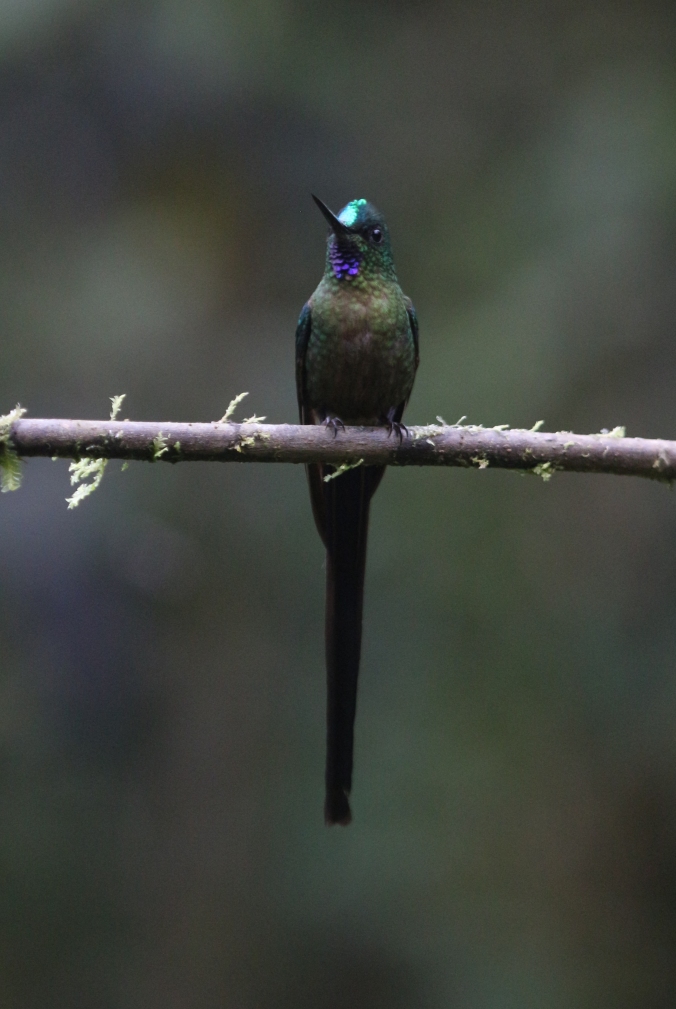 Almost all the thirteen hummingbird species were new for me, and many of them were Choco region endemics as well.  We walked around the hummingbird garden between the feeders, watching the hummingbirds go about their frantic business.  One of my favorite endemic species, the purple-bibbed white-tip perched on a branch right in front of me.